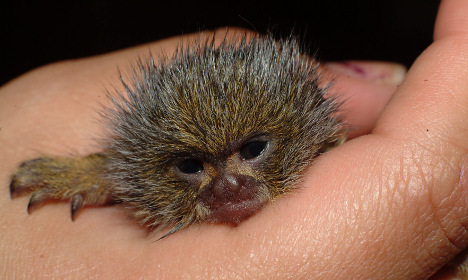 The pygmy marmoset is one of the smallest primates in the world at just over 100 grams (3.5 oz) and is native to the rainforests of South America.

A troop of four belonging to the Skansen zoo in Stockholm were supposed to be spending their spring moving to Saudi Arabia, but the plans have now been scrapped.

“They didn't want any monkeys any more because of the political situation,” the director of the aquarium at Skansen, Jonas Wahlström, told The Local.

Saudi Arabia recalled its ambassador to Sweden in March and announced it would not issue any new visas for Swedish business people in retaliation for comments made by Foreign Minister Margot Wallström criticizing the oil-rich nation's record on human rights.

But the Swedish Foreign Office said last week it was expecting Saudi Arabia to start issuing visas again as the ambassador's return to Stockholm was reported.

However, it appears the improved relations do not apply to our primate cousins. During the Easter holidays Wahlström received a phone call from the head of the zoological garden in Riyadh saying that they were no longer allowed to import any monkeys.

“The little monkeys were supposed to have gone down there, it had been decided for some time. But then they called over the weekend and said that they had been told by their authorities that 'Sweden? No, no, we don't want that'," said Wahlström.

“I certainly never would have imagined that this would happen, that we would get this kind of 'monkey business'. But we'll just have to keep an eye out for when they start issuing visas for businesspeople and try again. Perhaps then they will issue them for monkeys then too,” he added.