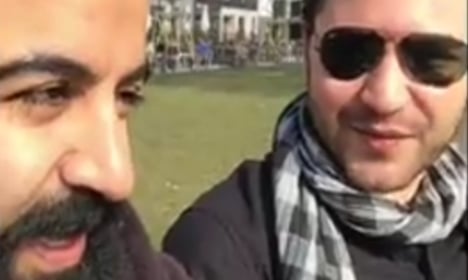 Ali Hamad (left) and Abdullah Homsi (right) who returned his phone. Photo: Private
Abdullah Homsi, a student who has only been living in Malmö for a few months, bought the smartphone for 5,000 kronor ($579) via the website Blocket, an online market place for second hand goods.
But after receiving the mobile, he soon realised that it had been stolen, because the owner, Ali Jehad, had saved personal information on it.
He tracked down Jehad, also 28, through Facebook and handed it over.
"When he told me he wanted to give it back, it did sound too good to be true," Jehad told The Local.
"We met and then afterwards I felt bad because he only recently moved here and he didn't know people could be so dishonest. He was probably the one who got played the most. I got my phone back. The thieves got so much money from this kid."
Jehad took matters into his own hands and started an online collection for Homsi. Malmö-based newspaper City then wrote about the campaign and nominated the good samaritan for its Person of the Month award on Facebook. He recieved almost 35,000 likes in a matter of days – a record for the paper – with Arabic and English-language media soon picking up the story.
By Monday, 6,200 kronor had been raised. Jehad put the money in an Easter egg and handed it over, filming the exchange on his phone in English, which you can view on The Local's Facebook page.
"Thank you for supporting me in this whole thing," Homsi says in the video, noting that he only wanted to keep the 5,000 kronor he'd lost when buying the stolen phone.
He describes his actions as reflecting "our good morals", referring to his Muslim faith.
The number of Syrians living in Sweden has been steadily rising since the Scandinavian nation became the first European country to grant automatic residency to Syrian refugees in 2013.
But while the majority of Swedes say they support immigration, concerns about integration are growing. Jimmie Åkesson's nationalist Sweden Democrats have made huge gains at the polls and became the third largest party in parliament in September 2014.
"The majority of things in the news today about Arabs in general aren't so good, so it's positive this all had so much attention. We've had a chance to showcase some good deeds," Jehad told The Local.
But Jehad, who is a freelance photographer and also works in a taxi office said he agreed that the hype around the event also reflected increasingly tense relations between different communities in Sweden.
"It shouldn't matter whether we were Arabs or not, we just did a good thing. And if we weren't Arabs and did the same thing then I don't think people would have cared so much about publishing it," he said.
Asked if the focus amounted to racism, he said: "Look, integration has changed a lot in Sweden. When I moved here as a refugee 20 years ago during the Gulf War, there was a lot of curiosity and people wanted to help and be nice. But now there are negative attitudes to immigrants and you see people looking at some cities in Sweden and saying 'no we don't want to be like that', even if they have never even met a refugee before."
Jehad is hoping his short video will go some way towards changing attitudes. He has also recently signed up as a volunteer for CISV, an international peace education charity which runs summer camps in Sweden for children from around the world.
"I have been working with young people and kids and teenagers from many years. I think I have a pretty unique perspective on how the world could be improved and CISV sort of worked for me the most when it came to choosing what to do next. It's great to get different nationalities together," he said.