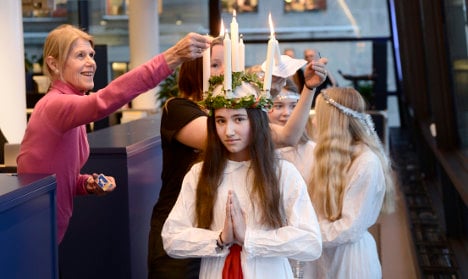 Swedes celebrating Saint Lucia in Gothenburg in 2014. Photo: TT
Swedes' beliefs contrast dramatically with the vast majority of most other nationalities on the planet, with more than six out of ten people surveyed across 65 different countries describing themselves as "religious".
The study was carried out by polling firm WIN/Gallup International as part of its 2014 End of Year Survey, with the data on religious beliefs released on Monday.
A total of 63,398 people were questioned, with only China, Hong Kong and Japan appearing to have a greater proportion of atheists than Sweden.
"It's a little bit surprising because we have a lot of members," Gunnar Sjöberg, head of communication for the Swedish Church told The Local.
"But then to be a member is not just to do with your personal beliefs. Many Swedes are supporting the social work we are doing, so that is one reason we have a lot of members. People know we need the church in Sweden even if they are not believers," he added.
Across Western Europe, five in ten people described themselves as "not religious" or "a convinced atheist" in the survey.
There are more than 3500 churches in Sweden and the Swedish Church (Svenska Kyrkan) says it has 6.3 million members in a country just shy of 10 million people. Before 1996, children whose parents were members of the Swedish Church were automatically enrolled at birth. But according to Statistics Sweden, just five percent of Swedes are regular church goers. One in three couples that get married in Sweden choose a civil ceremony.
Mosque and synagogue attendance is however rising thanks to growing numbers of immigrants arriving in Sweden from the middle east in recent years, and the Christian religion still plays a cultural role in Swedish life, with traditions such as Lucia (when children dress up as the female saint) remaining popular.
Thailand was the most religious country globally in the latest WIN/Gallup poll, with more than nine out of ten respondents descibing themselves as religious. Bangladesh, Georgia and Morocco were ranked joint second.
Jean-Marc Leger, President of the WIN/Gallup International Association, said that religion continued to dominate the lives of most global citizens.
"We see that the total number of people who consider themselves to be religious is actually relatively high. Furthermore, with the trend of an increasingly religious youth globally, we can assume that the number of people who consider themselves religious will only continue to increase.”
Gunnar Sjöberg added: "In Sweden compared to other countries, religious beliefs are very personal, people don't talk about religion a lot in everyday life. But when we speak to people about whether or not they pray, they often say 'yes'".