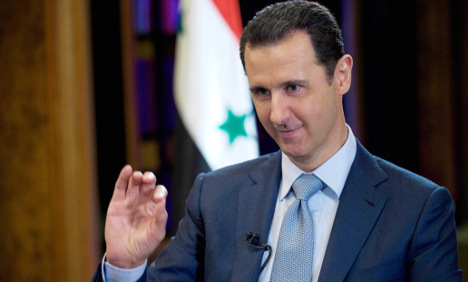 Syria’s President made the claims in a video interview in English with Sweden’s tabloid newspaper Expressen.

“As long as we have terrorism growing in different European countries, Sweden cannot be safe,” he said when asked about rising numbers of Scandinavians travelling to and from the middle east to fight alongside Isis and other extremist groups.

“The most dangerous leaders of Daesh and Isis in our region are Scandinavian…that’s what we have as information," he said.

“Terrorism is not a domestic issue, it’s not even regional, it’s global,” the President also noted.

The Expressen interview was published days after Sweden's Security Service (Säpo) told The Local there was "very little" it could do to stop people travelling to Syria to join al-Qaeda inspired groups, as EU officials estimated up to 6000 people from across Europe have now fought in the war-torn nation.

Säpo confirmed to The Local that at least 150 Swedish residents were known to have been to Syria or Iraq to fight for Isis or other extremist groups, with intelligence suggesting that at least 35 had died in the process.
"About 50 of those known to have travelled to Syria have returned to Sweden. They travel to Syria, return to Sweden and tend to go back again," said press officer Fredrik Milder.
But Milder added that "there is only very little we can do to stop people from travelling from Sweden to join al-Qaeda inspired groups".
More than 215,000 people have been killed in Syria's four-year war, which is increasingly dominated by jihadist groups.
When Expressen asked President Assad about his army losing control of vast areas to Isis (also known as IS or the Islamic State), he said: “You have ups and down, you have wins you have losses and that depends on many criteria”.

“We are still running the country,” he insisted.

More than 11 million Syrians have been forced from their homes since 2011, when pro-democracy protests against President Assad's government erupted and the country slid into civil war.

Since then, Sweden is the only EU nation that has offered all Syrian refugees automatic and permanent asylum.

“I think that is something appreciated around the world not only in our country,” Assad told Expressen.

“This is a good thing to do to give people refuge, but if you ask the Syrian people who fled from Syria ‘what do you want?’, they don’t want to flee Syria because of the war they want to end that war”.

Last month Sweden announced it was increasing its foreign aid to Syria and had earmarked 1.5 billion kronor ($174 million) for the middle eastern country in the coming years.