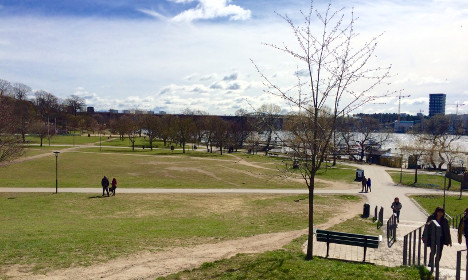 Blue skies in Hornstull, Stockholm this weekend. Photo: The Local
After a sunny Saturday and Sunday across large swathes of the country, Sweden is set to experience further warm weather until at least the middle of the week.
Temperatures in the south of the country are set to remain above 15C until Friday.
Sweden's west coast was expected to be the warmest area on Monday, with temperatures expected to rise to 20C in Bohuslän, Dalsland and Värmland
"It will be sunny almost throughout the country until Wednesday," said Lisa Frost, a meteorologist at SMHI.
But she added that "more unstable" weather patterns could reach the north of the country later in the week. Rain is currently predicted in the Swedish capital and other parts of southern Sweden next weekend, although Frost said that the forecast could change before them.
Check the weather forecast where you are in Sweden
April is a notoriously whimsical weather month in Sweden. But in 2014 the country experienced record high temperatures and even a "meteorological summer" – an official term for when the usual average of 10C for this time of year is topped on at least five days in a row.
Frost said that "cold nights" were currently keeping the average temperature down below that figure.
So far the highest temperature recorded in 2015 was 21.1C in Markaryd in Småland in the south of the country on April 11th.
A few days earlier, nearby Kristianstad saw mercury levels rise to 19.3C as warm winds swept up to Sweden from Spain, southern France and northern Africa.
2014 as a whole was Sweden's hottest year for eight decades and many are hoping that this year will follow suit.
Forecasters from Sweden’s weather agency SMHI looked at the mean daily temperature last year and found it was between 6.85 and 6.9C in 2014. The previous record was 6.73C in 1934.
READ ALSO: Seven silly signs winter is over in Sweden