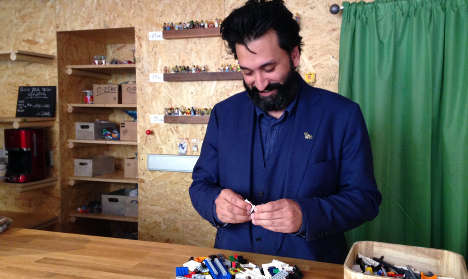 James Gill in his lego shop. Photo: The Local/Bobbie Carlson

Hidden amongst the old stone buildings on the backstreets of the popular Södermalm area of Stockholm is a mysterious little Lego shop selling the famous Danish construction toys.

Outside you do not see any large, flashy signs boasting the name “Lego”, simply strategically placed colorful letters spelling out the name “Mr. Gill”.

Mr. Gill is an independent Lego retailer recently opened by British native James Gill.  After many years of long, difficult days working as a high-end pub manager and later a chef, he decided it was time for a change.

“When I first came up with the idea for the shop, it seemed stupid enough that it might actually work,” Gill said with a laugh.

Gill decided on Stockholm after falling in love with the country after visiting friends in  2013.

“The people and the city are just fantastic,” he says.

“The fact that Stockholm didn’t have a lego shop is just crazy because Sweden has one of the largest Lego markets in Europe."

And so began the two-and-a-half month process of fulfilling his dream to open a shop in Stockholm. But it was not without challenges.

“It was a bit difficult to find a bank that would help me out because I have no credit history or work history in Sweden,” he explains.

The Swedish language was of course another barrier.

“I spent a lot of late nights simply translating documents using Google Translate,”  he adds, “but luckily the government also puts a lot of information in English.”

READ ALSO: "We drink our way through Swedish history"

Next it was just finding the shop location, which with the competitive real estate market in Sweden, was not the easiest of tasks.

Gill explains that he wanted to find a location on a back street, “I want people to be surprised when they find the shop".

He added that the estate agent was a bit discouraging because of the location, but Gill himself thought it was ideal and in January he began creating his brand through various social media outlets.

“I started taking photos of the Lego, photos of myself, and things I was doing in Stockholm.”  He adds, “ I also did lots of reviewing of sets and such.”

On March 21st, the store was open for business and had more than 400 customers the first day.

“It was just crazy!” Gill describes, “It was greater than I could have ever imagined.”

The concept of an independent Lego retailer is still a rather unique concept and some people have found it confusing.

Another unique aspect of Gill’s business lies in his marketing plan.

“I don't do expensive advertising campaigns, it’s strictly word of mouth and social media.”  He explains.

For Gill, owning the shop is about more than the money. Creating a friendly atmosphere where customers feel welcome is just as important.

“I want people to come, not just to buy Lego, but to talk about Lego and be involved.”

With this in mind, Gill has began hosting “speed-building” competitions on Sunday afternoons, and hopes to host a variety of other lego-centric events in the future.

READ ALSO: "There were no good brunch spots in Sweden"

Although he has only been in business just over a month now, Gill has already created a base of loyal customers.

“I'm not trying to be the cheapest or have the largest range of products, I just want to be the coolest!” Gill says with a smile. “A place where people can go to feel happy.”

Gill explains that he has long term goals of opening multiple shops of multiple different types, not just in Sweden, but all throughout Scandinavia.

To those wanting to start their own business in Sweden, Gill offers the following advice: don’t be afraid to ask for help.

“I think a lot of people try to do a lot of things on their own instead of asking for help. A lot of mistakes are made when people think they know what they are doing but they don't and they are afraid to ask for help," he says.