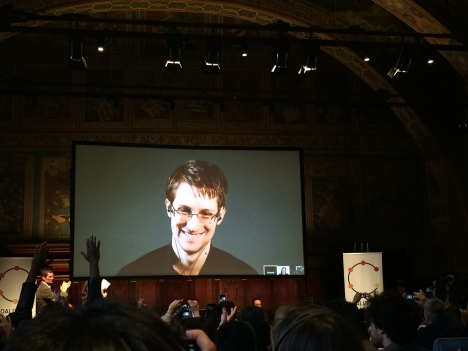 What could be better than a sweet escape from still cold and windy Stockholm to sunny Italy? An escape to a journalism festival, of course!

When I first learned about the festival in Perugia from my Italian classmate I tried to spread the word here through social media, but most of the Swedish mates just shook their heads and murmured: “Yes, of course, the conference in Italy. You just want to start wearing your sunglasses couple of weeks earlier!”

In spite of such ‘northern’ skepticism, the journalism festival in Perugia is an important international forum for discussion and professional collaboration. The event also offers many valuable opportunities for students, such as workshops, Q and A-sessions with experts, and field-practice for young photographers, reporters, radio- and TV-journalists.

The festival operates its own multimedia editorial office and invites the students to try out any of the content departments. I was lucky to become a member of the team working for the festival’s web-magazine.

The IJF 2015 program combined about 250 events in five days, including discussions of globally important issues such as ISIS and terrorism coverage in media, the immigration in EU and media image of migrants, the Ukrainian crisis and conflict reporting and many other pressing topics.

Those modern challenges for journalists were also actively discussed in my university in Sweden, so it was interesting to learn about the policies of other EU countries.

Generally, I have noticed that there is some tension between Italian and Swedish media professionals ever since the former were severely criticized by the latter on cases of inadequate coverage of the Italian ex-prime minister (associated with Berlusconi’s control over some Italian media companies).

One of the key events of the festival in Perugia was a panel discussion on ‘Surveillance versus privacy’, joined by Edward Snowden via video-call. The audience gathered in the hall of medieval church in Old Town to greet the whistle-blower, who answered the cheering crowd with a shy smile. I was very excited about the opportunity to attend this event and, moreover, to write a report on it.

Sometimes it was really difficult to choose between 2 sessions that were happening at the same time.

Thus, Italian audience, which is not very familiar with all details of the ongoing conflict, had to take Russian journalists’ information for granted. But that was just their opinion, not confirmed facts.