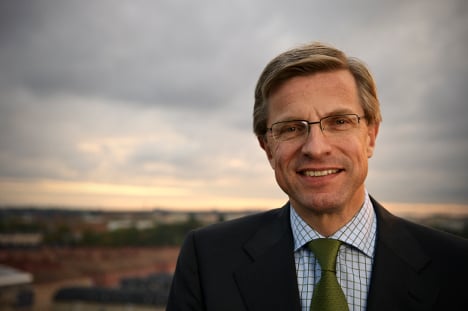 The setting is impressive.

An improbably large table. Floor-to-ceiling glass. A breathtaking view out over the Swedish capital.

It’s an imposing scene at one of Stockholm’s most attractive addresses, and about as far as away as you can imagine from Hans Stråberg’s humble beginnings in rural Sweden.

“Where I grew up, some older people lived in small cottages that still didn’t have electricity in the early 1960s, and some people who were my age now didn't have all their teeth,” he recalls, looking out over the rooftops.

“My brother and I were the only ones in the area who went to university.”

On the other hand, a smart boardroom is exactly where you’d expect to find a man who for almost ten years ran Electrolux, one of Sweden’s biggest international companies, and who now, in his fourth year of “retirement”, sits on the boards of several top-tier companies such as Investor and Atlas Copco, among others.

Growing up on the family farm near Västervik, a smallish town in southeastern Sweden, taught the 57-year-old the value of hard work and pragmatism – values he brought with him when he joined the Swedish white goods giant in 1983.

And in many ways, the soft-spoken, no-nonsense executive reflects, his own life and career mirrors the advance of Sweden over the same period.

“If you think back to what has made Sweden, a lot stems from the welfare state that helped people out of poverty,” he explains.

“The Social Democrats did a great thing by helping to expand the middle class. People emerged from poverty, education levels increased, standards of living rose and that gave people more security to know they wouldn’t fall into some dungeon if they failed.”

And while many Swedes may not like to admit it, Stråberg adds there’s no denying that Sweden’s neutrality during World War II positioned the country for rapid growth in the postwar period when the rest of Europe was rebuilding.

“You can’t underestimate the importance of having our infrastructure intact. It was a huge advantage,” he explains. “Sweden may not be where it is today if we had been bombed like so many other countries.”

Also important for Sweden’s growth, says Stråberg, is an enduring consensus about the importance of free trade. Both sides of the political spectrum are filled with advocates for policies that make it easier for Swedish companies to sell their goods and services on the global market.

Stråberg also cites the Swedish model of labour relations and how the country’s unions have – for the most part – coped constructively with the challenges of globalization, which in turn has helped Swedish companies grow and prosper.

“Unions have realized they can’t hold onto something that’s doomed. They tried that in the 1970s, but if there’s no market for widgets, then you stop making widgets and find something else,” he explains in reference to the great upheaval in Sweden’s shipyards in the 1970s.

“I give credit to unions for often supporting ways to encourage change.”

And Stråberg knows just how difficult change can be, having overseen the closing of several factories in Sweden and elsewhere, one of which was literally in his own backyard: Electrolux’s vacuum cleaner factory in his home town of Västervik. Stråberg had managed the very same factory earlier in his career, and often met workers and their families in the town. He admits the decision to move production to Hungary was a very difficult one, but one that nevertheless had to be made in order to keep Electrolux competitive.

“Of course it’s a shock at first. But eventually people understood we couldn’t sell vacuum cleaners from Västervik in a globalized competitive marketplace,” he recalls.

While education reforms following the industrial revolution laid the groundwork for Sweden’s rise in the 20th century, Stråberg also credits social welfare reforms enacted by the Social Democrats for helping accelerate the country’s upward trajectory. However, his opinion of Olof Palme, perhaps the party’s most famous (and controversial) leader, is decidedly different.

“The Palme era was a dark period for Sweden's history,” he says.

Besides cozying up to North Vietnam and Cuba, the Palme government tried to “socialize or expropriate companies and have the state run things” in the 1970s and 1980s, actions which ultimately led to a crisis in the early 1990s, resulting in painful reforms to the banking and public pension systems.

“The only thing you can thank them for is that they drove us into a crisis, and nations don't change unless we have a good crisis and in our case, it wasn't wasted,” says Stråberg.

Stråberg had a front row seat to the tensions Palme’s policies caused in the United States in the early 1980s while serving as an assistant to the technical attaché at the Swedish embassy in Washington. At that time, he recalls, most people outside tight knit foreign policy and business circles “didn’t know what Sweden was”.

“What they ‘knew’ about Sweden was that people were running naked in the streets and that we were a socialist, communist country,” he explains.

“Maybe people knew about Abba, but I’m not sure they knew where Abba came from. And I don't think they realized then how many successful multinational companies came from Sweden.”

Much has changed since then, but Sweden’s political situation remains a concern for Stråberg. Specifically, he’s worried about the ability of Sweden’s new minority red-green coalition to govern and the parliamentary challenges related to the rise of the Sweden Democrats.

“The biggest threat right now is political uncertainty,” he warns.

“We experienced something of a crisis in government last fall. But hopefully something good will come out of it. “

As the internet and increased international travel have made it much easier for news and people to cross borders, the world’s awareness and understanding of Sweden has changed drastically since Stråberg’s career began.

He points to the explosion in interest in Swedish music, food, fashion, and entrepreneurship as developments that have helped people see Sweden as more than simply “an exotic country with a lot of snow and cold and up at the Arctic Circle”.

Strong Swedish brands and products have also helped spread awareness about the country to new corners of the globe. But Stråberg admits he was slow to see the value of his own company’s Swedishness.

“At Electrolux, we never tried to sell Swedishness the way Ikea sells Swedishness,” he says. Ironically, Stråberg credits an American executive at Electrolux for persuading him to think again about the company’s relationship to its Swedish heritage.

“I really didn’t think it was relevant at first. But in the US, (current CEO) Keith McLaughlin and (CMO) MaryKay Kopf convinced me there was an advantage, so we started talking about ourselves as an international brand with Scandinavian roots,” he says.

“Those roots include purity; purity of materials, simplistic, stylish designs; sustainability, reliability, and trust; and that’s what I think the world connects with Sweden today.”

Increasingly, Electrolux’s home city of Stockholm is becoming known as a launch pad for new exciting companies like King and iZettle. But while the Swedish capital deserves plenty of praise as a great place to live and work, Stråberg says the Stockholm can sometimes feel a bit off the beaten path when it comes to traveling to other cities for business.

“We are so dependent on connecting flights to major cities outside of Europe, and that 2.5 hours to Frankfurt or hour to Copenhagen is a hassle,” he says.

“It’s like when I lived in Columbus, Ohio which isn’t a hub. I was overseeing 14 factories and always had to get to Cincinnati or Cleveland. It was brutal, and it can be the same way here.”

Simply put: “We need to get more direct flights here.”

“We certainly don’t want to become part of a feeder system for Lufthansa. Then we’d have to fly 2.5 hours just to get anywhere in the world.”

But Stråberg admits Sweden’s geography isn’t all bad. In fact, it may be part of the secret to Sweden’s success at spawning so many successful companies.

“There is something about cold weather and harsh conditions that means we have to plan ahead,” he explains.

“If you didn’t plan ahead, you didn’t get the crops in on time. I think that planning and work ethic has helped us a lot. We also have a bit of an underdog mentality, which makes us feel like we have to try harder.”

From Stråberg’s perspective, Sweden’s business climate is “good overall”, thanks to reforms that have reduced the overall corporate tax burden, helping make the country a competitive location for establishing new operations and attracting foreign talent, despite continued grumbles about high income taxes.

But that doesn’t mean there aren’t risks to Sweden’s hard-earned position as one of Europe’s most innovative and competitive economies.

“People have to realize it’s a global competition and if we just sit here thinking we're so good because of all these rankings, then we're going to go down very, very fast,” he warns.

“It wasn’t that long ago that we were really in the shit. We managed to take care of it, but we have to actively make sure we don’t end up there again.”