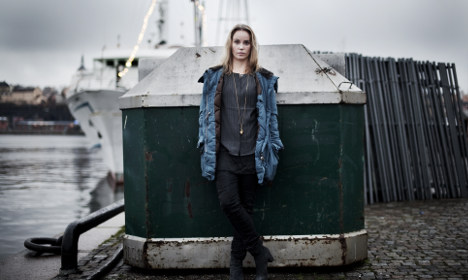 Sofia Helin who plays Saga in The Bridge television series. Photo: TT
Total traffic across the bridge jumped by 4.2 percent in the first three months of 2015, compared with the same period last year, with leisure traffic including journeys made by day trippers and tourists up by 9.1 percent.
After a decline in commuter traffic in recent years, the bridge also experienced a small 1.4 percent rise from this sector.
”We are extremely satisfied with developments,” says Caroline Ullman-Hammer, CEO of Øresundsbro Konsortiet, the body which manages the bridge (which is spelt with an 'Ø' in Danish)
"Leisure traffic and related activities…have performed well. The trend in commuter traffic is particularly positive,” she added.
Around 16,300 people now use the bridge each day, compared to 15,662 a year ago, according to Konsortiet's figures.
Head of Public Communications Sanna Holmqvist told The Local that both Danes and Swedes were making more regular journeys between Malmö and Copenhagen to visit attractions in the two cities.
"We offer club subscriptions for people who use the bridge which offer discounts at hotels, shops and restaurants and things. Many people are enjoying these after we marketed them quite strongly."
Asked if the boost in tourism traffic was also likely to include international travellers keen to journey over the bridge after it was made famous in the Nordic Noir drama The Bridge (known as Bron in Swedish and Broen in Danish), she said: "I have a feeling that more people are curious about the bridge these days — we do get a lot of enquiries but it — but that is something that is difficult to monitor."
Malmö tourism office does offer organized visits to the Öresund Bridge, which featured in the hit television series which has now been shown in 174 countries. Filming for a third series of the show got underway at the end of last year, with the first official teaser for the series revealed earlier this month.
The bridge itself is an impressive architectural structure and includes the world’s longest underwater tunnel.
According to Øresundsbro Konsortiet, commuter traffic across the water is set to rise further due to Denmark's strengthening economy.
"The number of people travelling to and from work dipped when Denmark was hit by the financial crisis so fewer Swedes were finding work here and some Danes moved to Sweden where housing was a lot cheaper. But many have since moved back to Copenhagen, where the jobs market is also recovering," said Holmqvist.