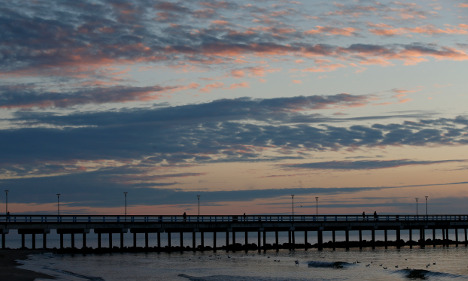 The Baltic Sea, as seen from Lithuania. Photo: TT
The laying of the Nordbalt cable, which is being built between Sweden and Lithuania, has been disrupted four times by Russian ships in the past two months.
"Sweden has discussed the matter with Russian authorities," Pezhman Fivrin, spokesperson for Foreign Minister Margot Wallström told the Aftobladet newspaper.
Sweden intends to take up the issue with Russia again on Monday.
The Lithuanian Foreign Ministry has also taken action, summoning the Russian foreign minister claiming that Russia is in violation of the United Nations Convention on the Law of the Sea (UNCLOS).
It released a statement accusing Russia of "attempts to interfere" with the construction of the cable, and saying Russia's excuse was that it was a "protection of their military exercise zones".
"Russian authorities have never asked Lithuanian institutions or received any prior authorization for such activities in exclusive economic zone of Lithuania," it concluded.
The 400-kilometre long cable runs from Klaipeda in Lithuania to Nybro on Sweden's east coast. The purpose of the cable is to improve Lithuanian and Scandinavian trading on electricity markets, and to increase the security of power supply to both the Nordics and Lithuania.
Url copied to clipboard!