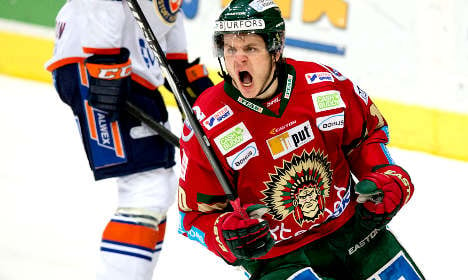 Frölunda Indians with the controversial logo on their shirts. Photo: Adam Ihse/TT

In the 1990s, Gothenburg-based ice hockey team 'West Frölunda' ('Västra Frölunda') changed its name to 'Frölunda Indians' and its logo to a Native American dressed in traditional feathers.

It is a common symbol in the United States, where many teams have similar logos, although the concept has received criticism in recent years. But you would be forgiven if a western Swedish ice hockey team's connection to the indigenous people across the Atlantic strikes you as unclear.

“When the team changed its logo in the 1990s it wanted to reflect that back in the 1970s people used to refer to it as 'The Wild West' when Frölunda were playing. Let's just say it was always 'interesting' to watch Frölunda play – in a positive as well as in a negative way,” the team's press spokesman told The Local on Tuesday.

However, the new logo has not sat well with all fans and it stirred up a debate in Sweden this week after a self-proclaimed Native American reported the team to the Swedish Equality Ombudsman (Diskrimineringsombudsmannen, DO).

He wrote: “I want to report their logo to you and I want to demand that it is changed because it is offensive to all Indians and it uses a stereotypical image of Indians.”

The story sparked some debate on social media site Twitter on Tuesday, with one person writing: “Has Johnny Depp reported the speedway team 'The Pirates' yet?”

But another person supported the proposal, writing “perhaps now Frölunda can stop calling themselves 'Indians' and become West Frölunda again”.

However, the Equality Ombudsman confirmed on Tuesday morning that it had dropped the case.

“We have arrived at the conclusion that it was not covered by Swedish discrimination law. Discrimination is defined in the legislation as somebody being disadvantaged or treated worse than another person in a similar situation and that has not happened in this case,” press spokesman Clas Lundstedt told The Local.

“This case could perhaps be related to freedom of speech legislation or similar, but that is not covered by laws on discrimination, so it is nothing that is within our remit,” he added.

Frölunda Indians play in the Swedish premier ice hockey league, SHL, and were the home team of famous Swedish twins and NHL players Henrik and Joel Lundqvist – who is the current team captain – during their formative years.

And chairman Mats Grauers told Swedish newspaper Dagens Media earlier on Monday that the team intend to keep their name and logo.

“I have a hard time understanding this, but everyone has the right to make a report and have their case heard. If this person feels that the logo and name are offensive you have to respect that, but I don't share their view,” he said.

“We look at the Native American as a positive symbol and there has never been any talk of offending or inflicting pain on a group of people,” he added.