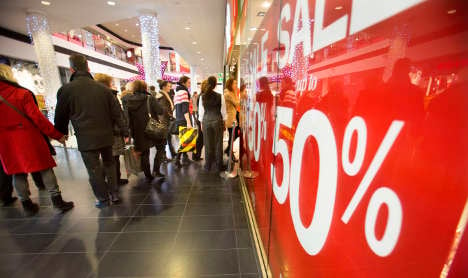 Shoppers in Malmö. Photo: TT
Sweden is on a mission to boost its economy. Part of the strategy involves cutting interest rates (to lower the cost of borrowing) and buying government bonds (essentially loaning money to inject into the country's economy), which the country's central bank (the Riksbank) hopes will help push up the prices of everyday goods and services in Sweden that have been stagnant for two years.
However the nation's number crunching agency, Statistics Sweden, announced on Tuesday that consumer prices were unchanged between March and April. Analysts had expected a price increase of 0.3 percent, according to a survey by news agency Reuters.
Statistics Sweden's figures also revealed that prices were down 0.2 percent compared to this time last year, causing eyebrows to be raised about the government's approach.
“It's a very big surprise,” Olle Holmgren, an economist at Swedish bank SEB, told newswire TT on Tuesday.
He said that forecasters may have “misjudged how international prices are affecting Sweden”, adding that “there is low inflation worldwide”.
Meanwhile Statistics Sweden said that inflation had stalled due to lower prices for package holidays, electricity, books, clothes, petrol and footwear.
READ ALSO: Six reasons Sweden's economy is set to brighten in 2015
Sweden's central bank (the Riksbank) has been steadily cutting interest rates over the past few months, but in April it announced that the nation's key interest rate, the repo, was likely to remain at its record low of -0.25 percent until 2016, despite much speculation that it could be lowered even further.
The bank is already under pressure to reverse that decision. The krona weakened against the euro following Statistics Sweden's announcement about prices failing to rise.
The Riksbank is next scheduled to discuss its interest rate strategy at a major conference in July, although there is speculation that the issue will be raised at an earlier meeting on May 18th.
Concerns about low inflation sit alongside a generally rosy picture for Sweden's economic future.
A key EU report released last week predicted that Sweden was set to benefit from “strong investment and a brightening outlook for exports” over the next few years.
Exports are forecast to increase by 4.1 percent in 2015 and 5.3 percent in 2016 according to EU economists, while investment growth is projected to rise at a slower pace of 4.1 percent in 2015 and 4.5 percent in 2016.