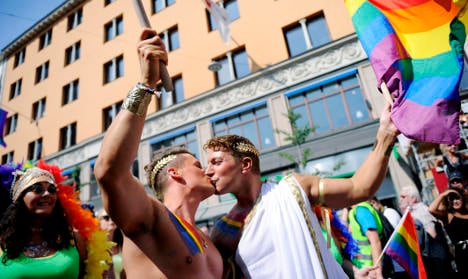 After looking at how well 48 different nations ranked on issues such as marriage equality, employment, adoption and medical treatment, the ILGA (European Region of the International Lesbian, Gay, Bisexual, Trans and Intersex Association) gave Sweden a score of 72 percent on its annual Rainbow Map.

The result puts Sweden above all other Nordic countries for LGBTI rights and in fourth place overall. Sweden also rose three places on the index, having come in seventh in a similar study by the group a year ago.

ILGA-Europe spokesman Juris Lavrikovs told The Local:  “There is no limitation in Sweden on marriage, LGBT issues were included in a national action plan and there is no necessary surgical intervention for transgender people. This is how Sweden gained in some points.”
“In Sweden there are still issues, for example if a person wants to register as a new gender, you still need to be diagnosed and there is still requirement for medical intervention. They abolished the surgical requirement, but you still need medical, hormonal or other treatment.”

The other Scandinavian countries weren't far behind, with Denmark and Norway also reaching the top ten and Finland coming in 13th place. The UK held on to its crown at the head of the table while Malta jumped eight places to come third. Armenia, Russia and Azerbaijan remained the bottom three nations.

Can you guess where your country is on our 2015 Rainbow Map? Check, compare, share! #rainboweurope pic.twitter.com/7JZgCRfNMi

“We witnessed several countries making historic strides, while others have stalled in terms of their equality development,” commented Paulo Côrte-Real, Co-Chair of ILGA-Europe’s Executive Board.

“The vital ingredient, present in so many of the countries who have climbed in our Rainbow Map rankings, was unshakable leadership from political figures and activist leaders, often in challenging contexts.”

The report also noted that recognition of the human rights of trans and intersex people came to the fore in a major way in 2014.

In Sweden it was agreed that the gender-neutral pronoun 'hen' would enter the dictionary, a promise that was fulfilled earlier this year.The move coincided with a number of local initiatives including gender-neutral toilets in several municipalities.

Denmark was also praised in the report for “great steps forward” in the shape of its “progressive legal gender recognition law” designed to make it easier for transgender people to have their gender identity legally recognised.

Lots of legal and policy change = lots of movement on our #rainboweurope 2015 ranking, just have a look: pic.twitter.com/9mcXXTyhtc

Joyce Hamilton, Co-Chair of ILGA-Europe’s Executive Board said: “Homophobic and transphobic violence, hate speech and discrimination continue to be an everyday occurrence for some of our LGBTI neighbours. Let’s hope that 2015 will bring more examples similar to Malta and Estonia. Now more than ever, Europe needs political leaders to work with and for LGBTI people in Europe”.

In 2013, the Spartacus International Gay Guide ranked Sweden the most gay-friendly nation in the world.