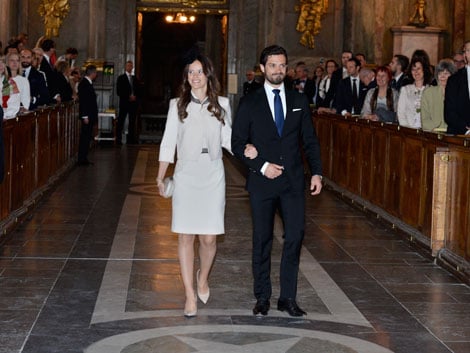 Kind of a preliminary walk down the aisle. Photo: TT

The service, called the “lysning” or “publishing of the banns” in English, is a public announcement of an upcoming marriage that was originally meant to allow anyone to raise canonical or civil legal objections to the union. It arrived in Sweden in 1200.

However, if anyone did have objections to the upcoming royal nuptials on Saturday, they kept mum about it.

Around a hundred people had lined up in the rain outside the Royal Chapel at the Stockholm Palace on Sunday morning before the service.

“I’m interested in the Royal Family and am happy that the prince Sofia,” said Louise Clerton, who was one of the first in line outside the chapel. “She seems like a good girl.”

The practice stopped being obligatory in Sweden in 1969, although it is still adhered to by the Royal Family. The services were held before the marriage of Crown Princess Victoria and Daniel as well as before Madeleine and Christopher O’Neill’s wedding.

Despite the royals’ love of tradition, there are some aspects of the “lysning” that have been jettisoned. A few hundred years ago, it was common for the bride-to-be to go through the streets in the afternoon begging. Instead, the couple will accept gifts in a gathering in the Royal Palace for invited guests after the service.

It’s expected that there will be few blenders and steak knife sets among the presents, but rather a fair number of donations to the foundation that Carl Philip and Sofia have established to support children and youth.

Also on Sunday, it was confirmed by the Royal Court that King Carl XVI Gustaf will confirm the official Princess title on his future daughter-in-law.

The royal wedding itself will take place on Saturday, June 13th, also at the Royal Chapel, starting at 4.30 pm.

Carl Philip has dated Hellqvist since January 2013. She is a former fashion model and former reality TV star. The couple met in 2009 at a club in Stockholm's posh Stureplan district. They have lived together on the island of Djurgården since 2011.