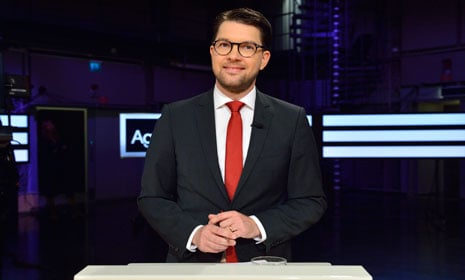 Jimmie Åkesson of the Sweden Democrats has something to smile about. Photo: TT

Sifo’s Voter Monitor survey, which was carried out May 4-12, asked Swedes which party they would vote for if elections were held today.

Of the 1,931 people asked, 14.7 percent said they would vote for the Sweden Democrats, up 2.2 percent since a month earlier and almost two percent since the fall.

“It’s clear that the Sweden Democrats are benefiting from the political debate over immigration and integration,” Sifo chief pollster Toivo Sjörén told the TT news agency.

“This questions is very high on the agenda right now and other surveys have shown that one in four voters think the Sweden Democrats have the best immigration policies,” he added.

The discussion over the past weeks over a possible ban on organised begging has also favoured the nationalist party, as well as the return of leader Jimmie Åkesson, who had gone out on sick leave last October.

Other polling firms have reported even stronger support for the Sweden Democrats. Norway’s Sentio found 17.8 percent of Swedes backed the party in its last survey and a poll by the UK’s YouGov found support had climbed to 19.5 percent.

The Sifo results confirm that the Sweden Democrats have taken a firm position as the country’s third strongest political force.

The Voter Monitor found that support for the Social Democrats had sunk to 25.9 percent, down from 27.4 percent in April. While that drop is not statistically significant, it does show a clear downward trend over the first part of the year. In December, the Social Democrats polled at 33.3 percent.

Several surveys have shown that that the party led by Stefan Löfven has lost trust when it comes to several important areas, such as education, unemployment and the economy, said Sjörén.