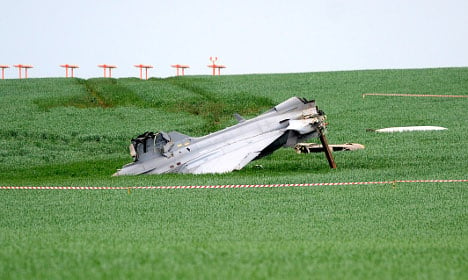 The wreckage of the crashed plane. Photo: Josef Vostarek/CTK/TT

The Saab JAS 39 Gripen jet was one of 14 leased to Hungary by the Swedish Defence and Security Export Agency (Försvarsexportmyndigheten — FXM).

The incident took place in Cáslav, 60 kilometres east of Prague, during Lion Effort, the largest ever gathering of air forces that fly the Swedish fighter jets.

The cause of the crash remains unclear but a spokeswoman for the Czech military said the pilots were unable to bring the two-seater plane to a halt on the landing strip.

Hungary has a pre-purchase deal with Sweden to lease 14 fighter jets until 2026. Sofia Karlberg, a spokeswoman for FXM, said it was too early too say if the crash would hamper the deal in any way.

Philip Simon, a spokesman for the Swedish Armed Forces, confirmed that the accident involved “a Hungarian plane that wasn’t part of the actual exercise but was flying alongside.”

It was “too early to say” what had gone wrong, he added. “That’s for the Hungarian accident investigation commission to ascertain.”

The two pilots were unharmed but both received medical attention, he said.

Jet fighters from three countries — Sweden, Hungary and the Czech Republic — are taking part in the Lion Effort exercises. Thailand, which also flies Gripens, has sent pilots but no planes.

Sweden is the world's 11th biggest exporter of arms, a recent study showed, with the Gripen planes forming the centrepiece of the country's military exports.