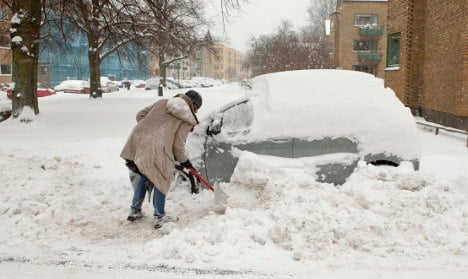 A woman stuck in snow in Malmö during the winter. Photo: TT
More temperature-related deaths happen on moderately cold or hot days, rather than during heatwaves or freezing spells, according to researchers who studied mortality rates in 13 different countries in a paper published in The Lancet medical journal.
The public health experts studied 74 million deaths in 384 locations between 1985 and 2012, including in Sweden, Canada, Japan and the UK, and discovered that cold weather was responsible for 7.29 percent of all deaths, while heat was a factor in only 0.42 percent.
But the study showed huge differences between nations, with Brits almost twice as likely to die during cold weather (7.8 percent of deaths) compared to Swedes (3.8 percent). In fact, Sweden fared better than nearly all the other countries surveyed as part of the research, with only Taiwan, Brazil and Thailand reporting a lower percentage of deaths linked to moderately cold weather.
“It is true that for example the cold effect is much lower in Sweden – as well as in in Canada and a few other places where populations are experiencing harsher winters compared to the others,” researcher Dr Antonio Gasparrini from the London School of Hygiene and Tropical Medicine told The Local.
“My hypothesis is that in Sweden people are more prepared to cope with the cold. This could be to do with physical acclimatisation but I think this is probably a very minor element and we will need to also look at things like socioeconomic factors, the infrastructure and habits of the population and individuals which prevent the negative effects that are felt in other areas of the world,” he added.
Reacting to the more worrying British figures, Sir David Spiegelhalter, Winton professor of the public understanding of risk at the University of Cambridge, told UK-based newspaper The Guardian on Friday: “This is a fascinating study, which estimates that 8.5 percent of deaths in the UK are ‘due to cold’. But it’s important to note that by ‘cold’, they mean any temperature less than the safest in the UK, which they estimate to be 19C – the risk only really rises substantially at less than 1C. So perhaps they are really saying that the UK climate is killing people.”
The study concluded that exposure to moderately cold temperatures can increase the risk of respiratory infections and be linked to heart problems.

Image: The Lancet
Gasparrini is now planning to conduct further analysis on the huge data set to see if he can measure some of the key variables which could be having an impact on death rates and general health in various nations.
“For example we might look at whether heating types or air conditioning use are significant variables,” he told The Local.
“At the moment we don't have any clear evidence, this is just speculation and a small part of a much bigger study, but eventually we could find some information which is really useful to people seeking to improve public health in different countries.”
Gasparrini and his team thought to have analysed the largest dataset of temperature-related deaths ever collected, and the more results which point to few deaths from radically hot or cold temperatures, will disappoint those who argue global warming could save lives in cooler nations such as Sweden and the UK.
“If – as the data seem to show – extreme cold is relatively unimportant, then a few degrees of warming will not yield a large reduction in cold-related mortality,” wrote Keith Dear and Zhan Wang from Duke Kunshan University in Jiangsu, China in a commentary published alongside the research in the Lancet.