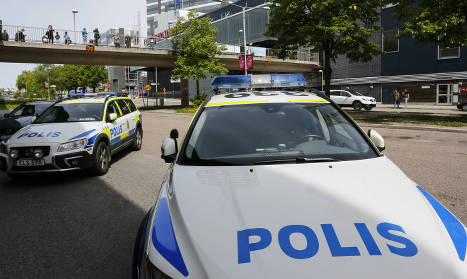 Police outside the Kista Galleria in northern Stockholm on Sunday. Christine Olsson / TT

The robbery happened at around 10.30am on Sunday morning.

Four armed men, aged between 20 and 30, barged into the store and attacked the staff. One was armed with a pistol, two had crowbars and another, who kept guard, had a larger firearm.

Everything was over in less than a minute, according the owner, wanted to remain anonymous.

Michel Clarenbeek was in a clothes shop when he saw the robbery unfolding. He ran out to look and, according to Sweden's Aftonbladet newspaper, he saw a man dressed in black who held a submachine gun in his hand.

“He aimed the gun at me. I lifted my hands and went back into the store. I did not get shot.”

After the robbery, the robbers fled in a dark Volkswagen, said police.   This was the second armed raid in Kista in the last two weeks.

Just eight days ago, three masked raiders drove an excavator into a pawn shop in Kista escaping with a variety of gold items.