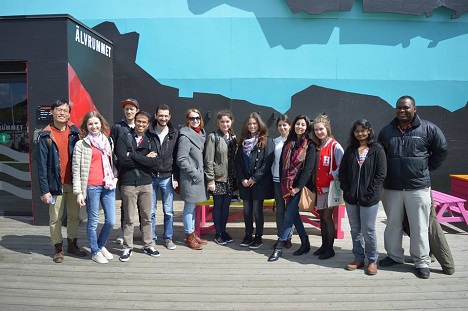 The spring semester is coming to the end, and it’s a high time to reflect upon what was done during these months.

Not only did we have potluck dinners and BBQ hang-outs as a network, but we also bonded as a group of inquisitive and enthusiastic individuals. With the support of the Swedish Institute, the Gothenburg SI local network managed to conduct over half a dozen different events, covering themes such as human rights, employment, entrepreneurship, leadership, creativity and sustainability.

The latter is of particular interest, and we want to take you on one different tour – to the place where vision becomes reality.

We start with an exhibition center – the first part of the study visit – Älvrummet, a place where city transformation plans are carefully developed and then presented to the public. Our guide told us briefly of the history of almost 400-year old Gothenburg, as well as its prized treasure – the Göta River.

This river used to be the main trade connection to China, and the whole city was in fact a fortress. Along with the winds of history, Gothenburg became the biggest Swedish shipbuilding and industrial city on the West Coast.

However, now the river does not only divide Gothenburg between the North and South parts, but it also represents the city’s social segregation into the vulnerable, marginalized North and the traditional “touristy” South.

The good thing is that the River City project claims to improve this situation by creating a new centre on the north bank of the river by renovating a part of the old centre. That will be done to build a denser and diversified economic centre that will connect the whole city. As the temporary residents of this city, we hope that their noble plans indeed eventually succeed.

Our next stop is Kvillebäcken, a pioneer project of an ecologically, socially, and economically sustainable district. What used to be not much of a pleasant place with old industrial buildings, had been completely demolished and rebuilt again. Several construction companies cooperated together to prove one fact – environmentally friendly and energy saving buildings exist, and they are the future.

Naturally, curiosity took over and we had a lot of questions to ask, including the affordability of apartments and similar. For those who are in the construction field, it was especially interesting to find out about designing and building process, recycling and energy saving systems.

Turns out that the main idea in behind the design was to create a city at eye level, where each building has a unique architecture, including local network of supermarkets, gym, park and cafés. Moreover, Kvillebäcken represents the future of ecologically sustainable society where houses have more bicycle parking than spaces for cars.

It was amusing to hear that Gothenburg's first self-emptying trash and a source separating waste suction is functioning in that area. You couldn’t really hear it, but it basically means that all garbage in the district is transported in pipes under the ground and it ends up in a collecting station on the edge of the area.

But wait, there's more – all food waste in the area becomes biogas, which in turn is used as renewable energy source. In general, a lot of attention is devoted to creating conditions for area biodiversity – green terrace on the roofs to slow rainwater and common “kitchen gardens” are the few examples. Green space is “a must” for sustainable neighbourhood and it should be planned before anything else can be done.

The tour is now over and we are all back to work on our exam sessions. But as the beautiful spring is turning into the summer, the Gothenburg local network taking its summer break to come back vitalized and anew. On behalf of all SI students, we wish you all a thrilling summer – and see you later!