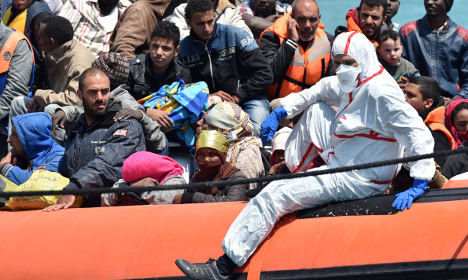 EU's executive body's plans also include proposals to beef up European border controls, including a military action plan to stop people smugglers and improving ways for qualified immigrant workers to get jobs.

The new mandatory quota system is designed to see most EU member states allocated a set number of asylum seekers based on their population size, economic growth and former engagement with asylum seekers.

It is intended to apply to Syrians and Eritreans who arrived in Italy after April 15th and are deemed to be in need of protection. A further 16,000 migrants who arrived in Greece from the two countries should also be relocated, the EU said.

Sweden — which already takes in more asylum seekers per capita than any other EU nation — has been asked to welcome 821 new migrants from Italy, 3.4 percent of the total, alongside 548 from Greece.

Most EU member states will be legally required to implement the quotas, although they still need to be approved by national ministerial representatives from each country.

The UK is notably absent from the measure, following the British government’s vocal opposition to plans to relocate refugees.

This is because —  along with Ireland — it has a long-standing 'opt-in' right on some EU legislation, which means it is not obliged to participate. Denmark has a similar 'opt-out' right and will also not take part in the quota scheme.

The UK is however included in an additional EU measure to resettle 20,000 refugees from outside Europe, part of a scheme aimed at stopping people taking the dangerous journey across the Mediterranean in order to seek asylum. Sweden has been asked to help 491 people as part of the same measure.

The High Representative for the European Commission, Federica Mogherini, said: “Two weeks after adopting our Agenda, we present today concrete proposals for its implementation, with one main aim: quickly save lives and provide protection in the EU for people in need, be they at sea, in the EU or in third countries.”

“For this reason, we are intensifying our cooperation with countries of origin and transit and with countries hosting refugees, not only to support asylum and migration capacities, but also to tackle the root causes that force people to escape and migrate: poverty, wars, persecutions, violations of human rights and natural disasters.”

Sweden is one of the most vocal supporters of the new quotas, which are also strongly backed by Germany.

“Our Common European Asylum System is not very common in a situation where a handful of member states are taking the responsibility for over 90 percent of the asylum seekers,” Sweden's justice and migration minister, Morgan Johansson, told The Local last week.

Sweden's foreign minister, Margot Wallström, recently told The Local that she predicted the Commission's proposals were likely to be “controversial”, but added: “What if we lived in a war zone? We would also want to flee somewhere safe with our children, or try to secure a future elsewhere. It has to do with whether or not we are serious in the EU about our guiding principles – this will affect our credibility.”