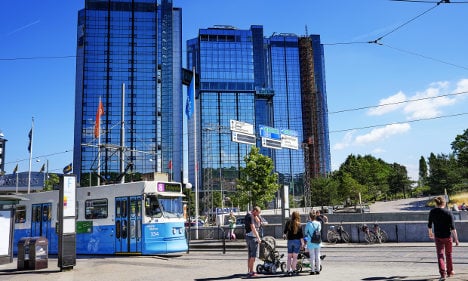 Apartment blocks in Gothenburg: Photo: Simon Paulin/Image Bank Sweden
Apartment prices have shot up in Gothenburg and Stockholm in recent months with one-bedroom properties in central locations regularly selling for more than three million kronor ($352,439).
Researchers at Swedbank, which has eight million customers across Sweden, have been closely analysing mortgage payments for the bank's annual Boindex (property index) and are warning that people living in the heart of the nation's cities are facing growing “affordability problems” due to needing to fork out more than 30 percent of their post-tax salaries on mortgage payments and other related costs.
“Housing affordability is rather good on an overall basis in Sweden but there is a very divided market and the average buyer of a cooperative apartment in Stockholm or Gothenburg is facing a higher risk than in the past,” Jan Ihrfelt, an analyst for Swedbank, told The Local on Thursday.
The bank's Boindex scores the purchasing power of households, with 100 presented as the minimum figure needed in order to avoid financial risk, and the point at which mortgage payments and other fees and bills linked to accommodation represent less than 30 percent of disposable income.
While the average result across Sweden for those living in cooperative apartments is 120, households in central Stockholm scored 99, while in Gothenburg city centre the figure was 97 in the latest research.
READ ALSO: Five questions to ask before buying a home in Sweden
For those able to afford houses in Sweden's major urban centres, the Boindex suggested a slightly more favourable picture, with Stockholm given a score of 110 and Gothenburg reaching 104.
“This admittedly gives a bit of a margin, but not a major one,” said Ihrelt.
“These figures might sound very close to 100, but they represent a critical point. Once people exceed spending 30 percent of their income on accomodation costs, they have lower margins and could be at risk for example if interest rates go up in a year or year and a half,” he added.
“We should learn that the pricing of city located residential apartments is reaching its limit because people can't really afford what they are buying.”
But his warning suggests there could be good news for first-time buyers hoping to make an apartment purchase in the near future, as people become “more hesitant” about making purchases.
“When we have studied housing bubbles in other cities in the past we have seen that every single bubble starts with high priced new build apartments. Then when people put more than 30 percent of their disposable income down on housing costs, prices are eventually pushed down.”