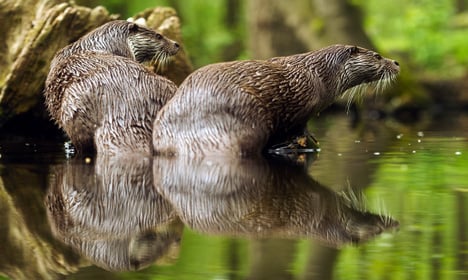 Otter populations are on the mend in Sweden. Photo: DPA

The lutra lutra species of otter was very common in almost all of Sweden until the 1950s, when numbers started falling precipitously. While some were killed in traffic accidents or drowned in fishing gear, the main cause of the decline is believed to have been highly toxic environmental contaminants such as PCB and DDT.

But now it appears that measures put in place to protect the animals have been successful. Otters have been taken off the “endangered” list and are now categorized as “near threatened,” Swedish public television (SVT) in Jönköping reported on Sunday.

“It feels really good that environmental protection has worked,” Dag Fredriksson, municipal ecologist in Jönköping, told SVT. “The environmental poisons that make it difficult for otters to have cubs have been phased out and are no longer used.”

While chemicals no longer pose a danger to otters, they still face a threat that won’t likely disappear anytime soon – traffic.

Environmentalists have taken some measures to counter the hazard posed by cars by putting up warning signs in areas where otters live as well as fencing with a fine mesh that aims to prevent otters from going onto roadways, where they often leave droppings to mark their territory. Stones have also been placed under bridges where otters can leave their markings.

“We’ve tried these methods in several places and we’ve seen there are fewer otters that get run over,” said Fredriksson. “So it works really well.”

The otter population has recovered to such an extent that the association “Save otters in Småland” recently voted itself out of existence.

“That’s a great acknowledgement that we’ve succeeded,” he said.