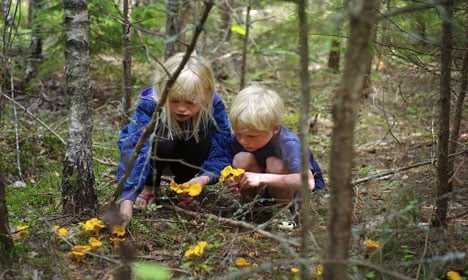 Those looking for a reason to remain optimistic in all the grey and drizzle might just need to get out in the forest and look down at the ground instead of up at the sky. The damp spring weather means mushrooms are coming early this year, and in big numbers.

“It’s completely due to all the rain we’ve gotten that mushrooms are coming in so early,” mushroom expert Pelle Holmberg told the TT news agency. “The real soaking in May means they’re already growing now.”

Holmberg, who has written a several books on mushrooms and had a series on Swedish public television devoted to the fungi in the late 80s, predicts a good, long mushroom season ahead.

“I hope chanterelles will already be growing at midsummer,” he added. “I’ve heard people are already picking them in southern Sweden.”

He’s been picking horse mushrooms himself, which he described as one of the country’s most delicious.

According to him, the cool weather has been a blessing, at least regarding his passion.

“It’s a common perception that warm weather is good for mushrooms,” he said. “But when the warm weather comes, so do insects that lay eggs in them.”

Another reason to stay cheerful is the fact that blueberries are flourishing amid all the dreary weather.

“Blueberry plants are fantastic in the Stockholm area,” he enthused. “It looks like it’s going to a real blueberry year, and that’s something we haven’t had in a long time.”