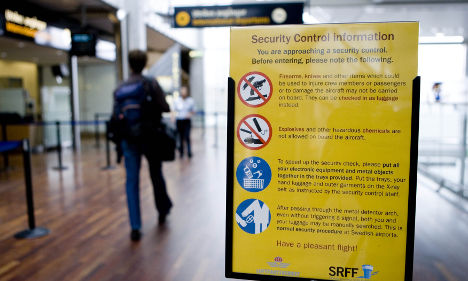 Lanvetter airport, where the man was arrested. Photo: TT
The teenager is reported to have been travelling to Copenhagen, from where he was set to travel to the Middle East.
Norwegian police contacted their Swedish counterparts on Tuesday morning after suspicions grew that the young man was planning to join the Isis terror group.
The youth was then returned to Norway where he was questioned by officers and was set to attend a hearing at Oslo City Court on Wednesday afternoon.
Agnetha Hilding Qvarnström, the chief prosecutor in the case, told Swedish newswire TT that she was unable to comment on claims in the Scandinavian media that the 18-year-old already had a history of criminal activities in Sweden.
According to Norwegian newspaper VG, the teenager has been in contact with radical Islamists in Norway.
Another Norwegian publication, Dagbladet, has linked the man's arrest to police raids on several addresses in the Oslo area this week, with computers and documents seized from a number of locations.
But the suspect has insisted he was not planning to join Isis.
“He has declared that he would not join any terrorist group,” his lawyer John Christian Elden told Dagbladet.
READ ALSO: Why Swedish girls are joining Isis
Norway has recently made it illegal to join a list of organizations it classifies as “terror” groups, or to provide assistance to extremists.
But there is no corresponding legislation in Sweden.
“We have no legislation criminalizing membership of any organization,” chief prosecutor Agnetha Hilding Qvarnström told TT.
Growing numbers of young people are leaving Scandinavia to join extremists groups in Syria and Iraq.
The number of Swedes estimated to have died fighting for Isis is believed to be “up to 40” according to Sweden's Security Service Säpo.
In April, Syria's President Bashar al-Assad told Sweden's Expressen newspaper that understood “the most dangerous leaders of Daesh and Isis in our region are Scandinavian…that’s what we have as information.”
“As long as we have terrorism growing in different European countries, Sweden cannot be safe,” added.