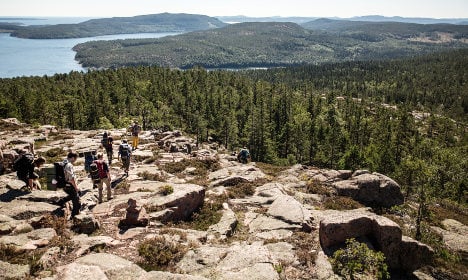 Sweden's High Coast is one of the most scenic parts of the country. Photo: Friluftsbyn Höga Kusten/imagebank.sweden.se

Outside the borders of Sweden, the High Coast in the north-east region of Ångermanland is an underrated tourist spot, despite offering some of the Nordic country's most beautiful scenery.

Stockholm-based freelance writer and British expat Danny Chapman lists the five hidden gems to head for in this must-visit region.

1. Stroll through the fishing village of Bönhamn

The extremely pretty and tiny old fishing village of Bönhamn makes a good base for the region. It consists of red boathouses (and only red, which is impressive even by Swedish standards), nestling around a gentle U-shaped cove.

The boathouses, with small private piers, are now all holiday homes and can be rented for surprisingly low prices. Behind them are rows of atmospheric wooden frames that were once used for drying the fishing nets. A small nature trail winds its way up from the southern edge of the village through forests and on to rocks, from where there are fine open sea views.

A stunningly surreal shoreline, located around five kilometres south of Bönhamn, Rotsidan Nature Reserve looks like something from another planet. It consists of a four-kilometre stretch of low-lying shoreline made up of completely smooth, flat and gigantic rocks. While it all looks otherworldly, it is also quite a unique and bewitching landscape.

The rocky shoreline and cold choppy water is not good for swimming, but with the sun beating down, the rocks are lovely and warm and their level surface makes them ideal for spreading out on and replenishing the vitamin-D reserves – Swedish style. For swimming, just head up the coast a little way to Norrfällsviken. With sunny blue skies and a view across the water of green mountains, the golden swathes of sandy beach here could almost pass for the Mediterranean. Except that there are no crowds. And the water is a bit colder, though this doesn't seem to bother the people at the nudist section of the beach.

Another charming old fishing village, Norrfällsviken has an atmospheric 17th-century chapel, more nature trails and a great camping and cottage site. There is even a restaurant that serves fish and chips on an outside terrace built on stilts over the water.

4. Admire the stunning scenery from Nordingrå

Designated a World Heritage Site by Unesco, the High Coast region gets its name because the land here, since the last ice age, has been rising from the sea faster than anywhere else on earth. This has helped make the region's interior of rolling green hills, a gorgeous bucolic countryside dream, punctuated with valleys and huge fjord-like lakes which were once joined to the sea but cut off long ago by the rising coastline.

Overlooking one of these lakes is the small, scenic settlement of Nordingrå. Its churchyard retains a dozen picturesque horse stables that conjure up days of old when it was the focal point for the surrounding farming community.

Many of the historic horse stables of Nordingrå are still there today. Photo: Danny Chapman

5. Dream up a fairytale at Skuleskogen National Park

The highlight of the High Coast is undoubtedly Skuleskogen (Skule Forest) National Park. It surrounds Skuleberget (Skule Mountain) and has numerous hiking trails through forests and past crazy cobble fields, which once sat on the seabed and are now incongruously halfway up the mountain.

The National Park also has a canyon straight out of a fairytale – literally. Slåttdalsskrevan (the Slåttdal Canyon) is a deep gorge that your Swedish friends or partners will know from the children's movie 'Ronja Rövardotter' ('Ronia the Robber's Daughter'), based on Astrid Lindgren's tale.

Above the canyon is a natural viewing platform overlooking a landscape of lakes, forests, islands and sea. It makes the perfect picnic spot from which to survey, from high, this enchanting coast. Slåttdalskrevan is like something out of a fairytale. Photo: Danny Chapman