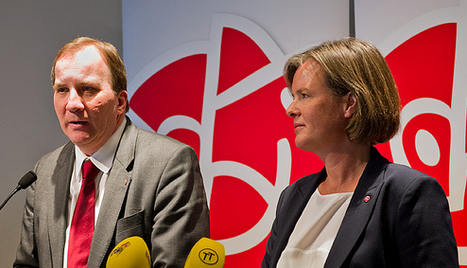 Not in Denmark: Swedish Prime Minister Stefan Löfven and party secretary Carin Jämtin. Photo: Social Democrats
Both Swedish Prime Minister Stefan Löfven and Party Secretary Carin Jämtin were in Finland on the day of its general election on April 19th to support the country's Social Democrats, and Jämtin came to Norway in 2013 to support the Labour Party.
But neither are travelling to Denmark to support Social Democrat leader Helle Thorning-Schmidt in Thursday’s election, with the party instead sending two relatively unknown party officials.
“They have other obligations today, so what we’ve done is that we have sent other representatives there,” Jämtin’s press secretary Peter Liljeros told The Local. “We have Leif Jakobsson, who is our expert in Danish issues, and we also have our international secretary Andrine Winther.”
Liljeros declined to comment on how Sweden’s Social Democrats viewed the language used on immigration in their sister party’s campaign. “I’m just a press secretary,” he said.
Denmark's Social Democrats have fought hard to neutralise the immigration issue, seen as their main electoral weakness, with the party outlining a series of policies designed to limit the number of asylum seekers coming to the country, and campaign posters declaring: “If you come to Denmark, you must work.”