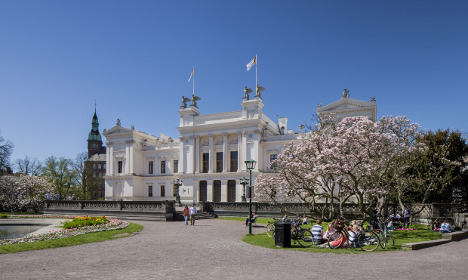 The Lund School of Economics and Management, which is part of Lund University in southern Sweden, was awarded the 38th spot in the ranking by London-based newspaper the Financial Times (FT).

Stockholm School of Economics came 12th, edging up from 13th place a year ago.

The fifth edition of the prestigious list put France’s HEC Paris at the top of the table, followed by Spain’s Esade Business School.

The FT questioned more than 4,600 graduates who had taken part in full-time Masters courses in 2012, before gaining experience working in the finance industry.

It also looked at how successful the students had become since completing their courses, in terms of salary, seniority and other achievements.

Students from Lund University's Masters in Finance programme were shown to be earning an average annual salary of $49,040 (397,335 kronor), three years after graduation.

However this was much less than those studying at Stockholm School of Economics and other institutions further up the table.

Sweden, which has a population just shy of 10 million, has recently performed well in several global university rankings, demonstrating an increased competitiveness on the international stage.

The Swedish University of Agricultural Sciences also made the top ten, coming in at tenth place for its specialization Agriculture and Forestry.

In the 2015 Times Higher Education World Reputation Rankings, Karolinska, which is Sweden's leading medical university, climbed up the table to 45th place after previously being ranked among the top 60 higher education institutions in 2014.

But Lund University which ranked among the 100 most prestigious higher education institutions in 2013 and 2012, failed to make this year's rankings, having also lost out in 2014.