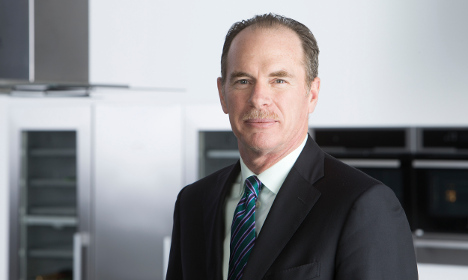 An article in Sweden's business daily newspaper Dagens Industri said “it's now certain Keith McLoughlin will leave, the only question is knowing who will replace him”.

It added that the 58-year-old manager, who has been CEO of the Swedish industry leader since 2011, had been living apart from his family since its return to the US in 2012.

But in a statement denying “recent speculations in Swedish media”, the company said on Thursday that it could “confirm that Keith McLoughlin has not resigned as Electrolux CEO”.

It also indicated that McLoughlin's current dual role heading the global group and its North American unit was a temporary situation awaiting a permanent appointment to the recently-vacated North American post.

“All well-run public companies conduct succession planning. We are searching for a new head of our Major Appliances sector in North America,” Electrolux said.

McLoughlin has led Electrolux since 2011, and oversaw its decision last year to acquire US company GE Appliances for $3.3 billion (2.9 billion euros).

According to Dagens Industri, McLoughlin will remain in his post until the transaction is finalised later this year, following approval by US regulators expected this summer.

The paper said GE Appliances head Charles Blankenship is considered the favourite to succeed McLoughlin in the even of his departure.

Failing that, Dagens Industri said Electrolux would likely choose a Swedish candidate for the top post.

The news comes as Sveriges Radio reported that the company is set to announce plans to dismantle their factory in Mariestad in central Sweden and moving production to Hungary, affecting 250 employees.

In mid-morning trades on the Stockholm market on Thursday, Electrolux stocks were trading 1.45 percent lower than Wednesday's close, while the rest of the market was down 0.31 percent.