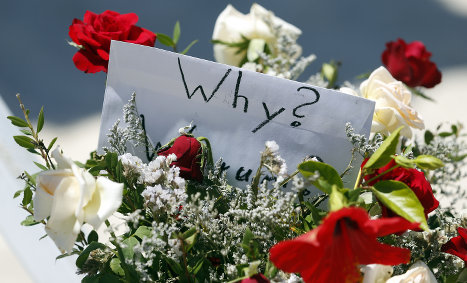 Flowers at the scene of the shooting in Sousse, Tunisia on Saturday. Photo: AP Photo/Darko Vojinovic

Brun told Swedish news agency TT that the war against terror is not fought on geographical terrain, as with conventional wars, but in the minds of people.

By providing vulnerable women in the Middle East and Africa with education and health care they can be helped to take control of their lives, he argued in the interview on Saturday.

“Those who control their lives do not become suicide bombers.”

“The USA and Europe needs to address this issue and Sweden could lead the way. But not enough is being done,” he said.

“Women are key to preventing radicalisation. Mothers can help stop their children going to fight for terrorist organisations,” she said.

But Sahlin believes the Swedish government is not doing enough to help these mothers.

“One way to address the problem is the establishment of a hotline which is available in many different languages.”

Sahlin added that mothers could turn to such a resource for advice if they feared one of their children was becoming radicalised.

Interior Minister Anders Ygeman said that efforts directed at women and families were being made but agreed that staff in both agencies and municipalities needed more training.

“We have been a little naive, a bit ignorant and have been less able to detect this type of violent extremism than others,” he said.

In the late summer, a new national strategy against terrorism will be debated in the Swedish parliament, the Riksdag. The strategy features new measures to prevent radicalisation and staunch recruitment to terrorist organisations.