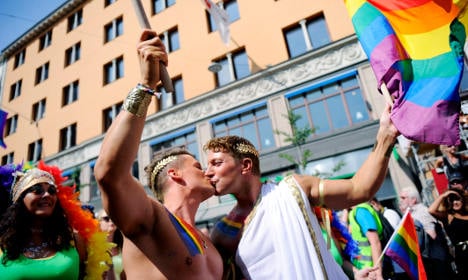 Now in its 18th year, Stockholm's Pride Week is the biggest festival of its kind in Scandinavia and sees tens of thousands flood the streets every year to take part in the bright, bold and glamorous celebrations.

And this year, those hoping to celebrate the festival by tying the knot will be able to get married for free at Stockholm's iconic City Hall. Normally couples who are not registered as residents in Stockholm are charged a fee of 500 kronor ($60).

Social Democratic local councillor Karin Wanngård, who is behind the initiative, told the Dagens Nyheter newspaper that she hopes it will become an annual tradition.

“First and foremost it's a fun event, that the city invites people to do this, but it is also a symbolic signal from the city that Stockholm should be characterized by tolerance,” she said.

The free ceremony, which is available to same-sex and heterosexual couples alike, also includes refreshments and a wedding photographer. Couples are, however, advised to book in advance and sort out all the necessary paperwork before they show up on the day.

It's not the first initiative of the kind, with several drop-in marriage ceremonies usually on offer during Pride Week. Last year, the festival made headlines when a convenience store, part of the 7-Eleven chain, offered weddings conducted not only by a priest, but also by outspoken Swedish politician Mona Sahlin and Imam Ludovic Mohamed Zahed from South Africa.

Stockholm Pride Week is set to take place from July 27th to August 1st this year. Tickets for the whole week are on offer for 800 kronor. Concessions are available. Marriage ceremonies, which you can attend without buying festival tickets, will take place on Friday July 31st from noon to 3pm.

Same-sex marriage has been legal in Sweden since 2009 and it is supported by the vast majority of Swedes, who took to social media in droves to show their support after the United States joined the ranks of countries which have approved gay marriage last week.

Tens of thousands of Swedes also added a rainbow flag to their Facebook profile pictures in praise of Friday's historic vote by the US Supreme Court to legalize same-sex marriage across the whole of the States.

“I think it's simple enough: people have a great feeling of 'finally'. We have taken huge steps on this issue previously in Sweden and people probably feel great joy that other parts of the world now propose the same thing. And the [Facebook] application is also very simple and well made as well,” social media expert Brit Stakston told Swedish newspaper Metro on Monday.