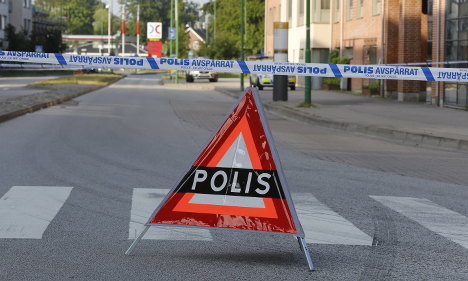 A police sign near the crime scene. Photo: Stig-Åke Jönsson/TT

“Those we are looking for are in the Malmö neighbourhood, perhaps even Skåne,” Eva-Gun Westford from Skåne police, told the TT news agency.

“There was very good level of information from witnesses and this has led to the police being able to tie the two suspects to the murder.”

The 20-year-old man was found on Lundavägen, a street in Arlöv just north of Malmö, after a number of people raised the alarm shortly before three o'clock on Sunday morning.

The man had several gunshot wounds and was transferred by ambulance to Skåne University Hospital in Malmö. But his life could not be saved.

According to police, the murder is not linked to the recent wave of crime and violence in Malmö.

“This was a personal issue and has nothing to do with this gang-related violence that has occurred in Malmö, said Westford.