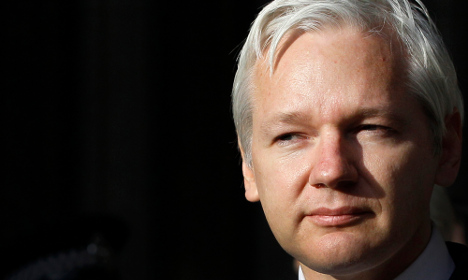 Assange has been ensconced in Ecuador's embassy in London since 2012 to avoid extradition to Sweden. He is wanted in the Nordic country over allegations by two women, one of rape and another of coercion and sexual assault, which he denies.

Swedish prosecutors had been due to travel to London to question the 43-year-old hacker this summer, but have been struggling to get permission from the Ecuadorian embassy.

But time is running out, one of the women's lawyers told Swedish Radio's news programme Ekot on Thursday morning. Some of the alleged offences will reach their statute of limitation in August, which means it will no longer be possible for prosecutors to take them to court.

“If the statute of limitation comes into effect, and most things indicate that it will, the prosecutor will drop the investigation,” said Claes Borgström, who represents one of the women.

The two alleged offences that will reach their statute of limitation in August are unlawful coercion and sexual assault. Prosecutors will still be able to charge the Australian on suspicion of rape.

Sweden's director of public prosecution Marianne Ny declined to comment, but responded via a press officer that she “is trying to make an interrogation happen, preferably as soon as possible. She is however waiting for permission from Ecuador.”

Assange's lawyer Per E Samuelsson told Ekot: “We have written to the prosecutor to make it clear that we can travel to London on just a few days' notice this summer so that the questioning can be carried out.”

Swedish prosecutors were initially scheduled to visit the British capital last month, but cancelled the meeting at the last minute after they failed to acquire permission from the Ecuadorian embassy.

Ecuador's foreign ministry said at the time that it was still considering the request “in the spirit of judicial cooperation” and would make a decision based on international law and “Ecuadorian jurisdiction in the area of asylum rights”.

He has long offered to be interviewed by prosecutors at the Ecuadorian embassy or by video link.

Swedish prosecutors had insisted that he travel to Sweden to answer to the allegations, but in March they finally agreed to question him in London, marking a significant U-turn in the case that had been deadlocked for nearly five years.