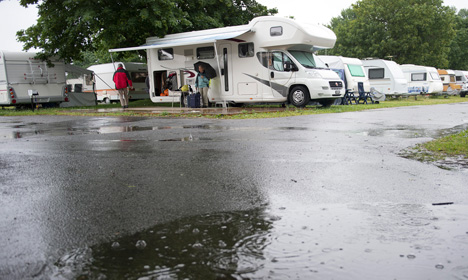 Some hard-core campers are braving the weather at home, but many Swedes are heading south. Photo: TT

According to the travel company Ving, part of the Thomas Cook Group, nine of ten of their summer holiday packages are sold out. And for those who are still determined to go where they can shed their jackets during the daytime, things could get expensive.

“The average price for a last-minute trip this week is about 7,700 kronor per person, about 1500 to 200 kronor more expensive than last year,” Ving spokesperson Magdalena Öhrn told the TT news agency.

“The bad weather is what’s driving our sales,” she added. “They were up 50 percent last week compared to the same week last year.”

Another big travel agency, Fritidsresor, has also reported a strong growth in the desire to get to warmer regions.

“In the middle of May, we Swedes started looking ahead and thinking ‘summer’s almost here, and it’s raining’,” said spokesperson Mathias Bergendahl. That’s when the wave of bookings began that led to the new record, he added.

While the weather warmed up briefly at the beginning of July, Sweden experienced its wettest May since 1962 and most of June and July has been disappointing for sun lovers.

The most popular destinations now are in the Mediterranean, such as Crete in Greece or Antalya in Turkey.

But apparently, not everyone is bothered by having to don jackets and raincoats in July. Bookings at camping spots and huts are at healthy levels despite the clouds.

“We had a cold spring and a late start to the summer, but our guests camp because they love it,” said Lars Isacson, head of SCR Svensk Camping. “We live in Sweden and many people are used to the fact that the sun doesn’t shine all the time.”

That opinion is shared by Magnus Nilsson, chairman of Svensk Turism, a tourism industry umbrella group.

“A lot of people are taking their holidays in Sweden,” he said, but added that many people this year are choosing to spend time near cities instead of more isolated places, such as near the coasts.