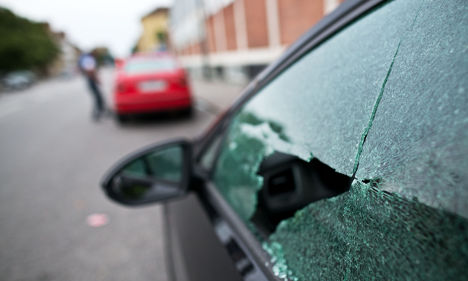 One of the cars damaged in the blast. Photo: TT

More than thirty people were in the hall when the blast took place with police called to the scene at around 2.15am.

Police said on Tuesday morning that they were unsure what had caused the explosion and had not made any arrests but confirmed that they were speaking to witnesses.

One man was injured in the blast and was taken to hospital to be treated for minor shrapnel injuries.

The explosion took place in an industrial area (Norra Grängesbergsgatan) in the south of the city, close to the Rosengård suburb which has a reputation for violence and gang related crimes.

“There has not been a threat against the premises before as far as we know,” Lars Lindwall, a spokesperson a Skåne police told Swedish newswire TT.

“Whether there are connections to earlier blasts and violence in Malmö recently it is too early to say…we will analyze if it is connected in any way,” he added.

The explosion at the community centre comes in the wake of a wave of summer violence in Sweden’s third largest city including shootings, explosions, hand grenades being thrown and cars and buildings set on fire.

Officers have also linked some of the rising violence to an increased import of illegal weapons and recently called for tougher border controls on the Öresund bridge between Sweden and Denmark in a bid to tackle the problem.