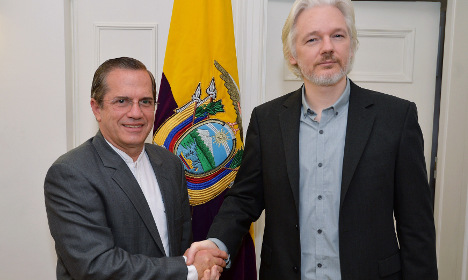 Their comments come after Ecuador's foreign minister accused Sweden of blocking his country's attempts at allowing Swedish prosecutors to travel to London to question Assange.

The WikiLeaks founder has been ensconced in Ecuador's embassy in London since 2012 to avoid extradition to Sweden, where he is wanted over allegations by two women, one of rape and another of coercion and sexual assault. He denies the claims.

Swedish prosecutors had been due to travel to London to question the 44-year-old hacker this summer, but a scheduled visit in July was cancelled at the last minute after they said they had been struggling to get permission from the Ecuadorian embassy.

However, in an interview with The Guardian newspaper published late on Thursday, Ecuador's foreign minister Ricardo Patino accused Swedish prosecutors as well as Swedish authorities of dragging their feet on applying for permission to quiz the Australian at the embassy.

“I do not find it acceptable that (…) [having] finally decided to answer the calls during all these years to continue the case, they would expect the role of Ecuador would be limited to opening the doors of its embassy,” said Patino.

The South American country insists that its legislation requires a formal agreement to be struck between Sweden and Ecuador before Assange can be interrogated.

However, according to documentation seen by The Guardian, Sweden is of the opinion that such an agreement would be unnecessary and that international convention is already being adhered to.

Patino told the UK newspaper that despite his country offering “the stated and sincere objective of reaching a mutual understanding”, there was “a refusal to discuss on [Sweden's] part. This certainly hinders any progress. Honestly, I do not know why. Only Swedish prosecutors can give an answer”.

The Local has sought a comment from the Swedish foreign ministry.

Meanwhile, Sweden's Prosecution Authority (Åklagarmyndigheten) declined to respond to Patino's claims on Friday and reiterated its intent to question Assange at the embassy this summer.

“We don't have any comment on [Patino's statement] but we have asked the Ministry of Justice and the Embassy of Ecuador for permission to travel to London to interrogate him as soon as possible,” a spokesman told The Local on Friday morning.

Swedish prosecutors had initially insisted that Assange travel to Sweden, but in March they finally agreed to question him in London, marking a significant U-turn in the case that had been deadlocked for nearly five years. However, according to Ecuadorian authorities they only received the first request for access, via its Stockholm embassy, on June 12th.

In any case, time is running out for Swedish prosecutors as two of the alleged offences — unlawful coercion and sexual assault — will reach their statute of limitation in August. Prosecutors will still be able to charge the Australian on suspicion of rape.

“Our goal is to interrogate him as soon as possible but it is up to the authorities to approve our journey to London,” the spokesman for Sweden's Prosecution Authority told The Local.