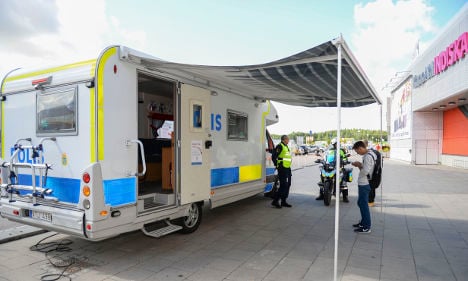 Police outside Ikea in Västerås on Wednesday. Photo: Maja Suslin/TT
“We continue to gather in knowledge in hope. Our task is to have the suspects remained in custody,” Västerås police chief Per Ågren told Swedish media on Thursday morning.
On Wednesday Swedish media reported that the older suspect, police had previously said was aged 35, had recently been told that he was set to be expelled from Sweden and tried to kill himself after the attack.
The man, who police have revealed is an asylum seeker from Eritrea, had attended a meeting with the Swedish Migration Board in Västerås on Monday, Swedish tabloid Aftonbladet first wrote on Wednesday afternoon, quoting the head of the office, Fredrik Bengtsson.
The newspaper published migration board documents calling for the suspect to be deported to Italy, after his application for residency in Sweden was rejected on July 16th.
Other Swedish media quickly picked up on the tabloid's image of the paperwork.
Under EU law, migrants can be sent back to their first point of entry to the European Union, suggesting that the man may have initially travelled to the Mediterranean from Africa.
The 35-year-old is the main suspect in the case and is understood to remain in hospital in Västerås after sustaining injuries himself.
On Wednesday evening Aftonbladet also reported that surveillance camera footage from the Ikea store showed the alleged attacker trying to commit suicide after the stabbings.
The video shows a man grabbing two knives from the kitchenware section “several seconds before the murder” then attacking the two shoppers, a 55-year-old woman and her 28-year-old son, the paper said.

“The attack ends when the alleged murderer stabs himself in the stomach.”
A second man, 23, has also been questioned by police and has denied being involved in the violence.
IN PICTURES: Ikea stabbing victims remembered at mall
Swedish police have been largely tight lipped about their investigations but suggested at a press conference on Tuesday that they did not believe the attack to be politically motivated.
Deputy Chief Prosecutor Eva Moren also told Swedish media that the attack was unlikely to be due to a personal grievance.
“At the moment there is nothing to suggest that there is any connection between the suspects and the victims,” she said.
She confirmed that a knife had been used in the attack and said that police had found the suspected weapon.
The Ikea store in the central Swedish town of Västerås, about 100 kilometres west of Stockholm, opened for business again on Wednesday morning, less than 48 hours after the two victims were fatally stabbed on Monday lunchtime.