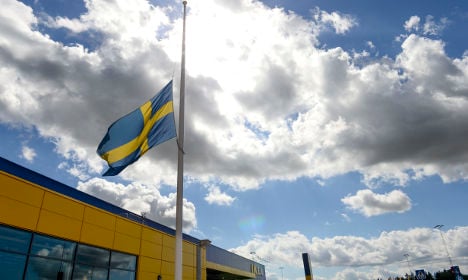 A flag flies at half mast at the re-opened store on Wednesday. Photo: Maja Suslin/TT

The Ikea store in the central Swedish town of Västerås, about 100 kilometres west of Stockholm, opened for business again on Wednesday morning, less than 48 hours after the two victims, aged 55 and 28, were fatally knived in the kitchenware section on Monday lunchtime.

“We have talked through this with the police and therapists and priests and all the staff, and all of us at Ikea wants to be here [for customers],” manager Mattias Johansson told he TT news agency.

“We want to be open and we want all parts of the department store will be open,” he added.

The manager had previously told regional VLT that the day of the violence had been “the worst working day of my life”. Mattias Johansson back at work on Wednesday. Photo: Maja Suslin/TT

Two Eritrean asylum-seekers have been arrested on suspicion of murder following the stabbings, but the motive for the attacks is still unknown. One of the suspects, aged 23, has denied any involvement, while the second, 35, was taken to hospital with serious stab wounds and is not thought to have been questioned yet.

The circumstances surrounding the incident remain shrouded in mystery and Swedish police have been reluctant to disclose any details of their investigation.

“We have fragments of the chain of events, of course, but to claim that 'this is what happened, from an objective point of view' [is not possible]. Of course there's a picture, but perhaps not enough of a complete picture,” Västerås police chief Per Ågren told the TT newswire on Wednesday.

Officers have also declined to comment on reports that the suspects may have used knives they picked up from the Ikea store's own shelves, but Johansson announced he had temporarily stopped all sales of knives in the Västerås store.

“I took the decision out of consideration for my colleagues,” he told TT.

At an earlier police press conference on Tuesday, officers confirmed that the two suspects were believed to have known one another and were living at the same accommodation complex for asylum seekers.

Police presence has been stepped up in the area as well as at other refugee centres across the country in an attempt to avoid any potential backlash against the immigrant community.

“Respective local police districts have been tasked with these measures…to be there in order to create security for everyone there, both for those who work and for those who live there,” Ågren told Swedish media at Tuesday's press conference. Deputy chief prosecutor Eva Morén told Swedish media that the stabbings were unlikely to have had a political or personal motive.

Meanwhile, the younger suspect's lawyer Maria Wilhelmsson said that her client was innocent and suggested he had simply been “in the wrong place at the wrong time”.

“He has been there [Ikea] but he didn't do anything,” she said.

Around 300 people are employed at the Västerås Ikea store. An Ikea spokeswoman told The Local that staff members as well as customers had been receiving counselling since the incident.

“Right now our full focus is on our coworkers. Shoppers and others who were at the shopping centre are also being offered help,” said Daniela Rogosic.