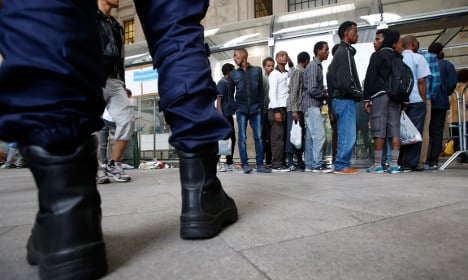 A news prognosis by Sweden's Migration Board (Migrationsverket) brings the number of predicted asylum seekers down from the figure of 90,000 suggested in February to 74,000.

With around 80,000 people applying for asylum in Sweden in the past year, the Scandinavian country still welcomes more migrants per capita than any other EU nation.

But as news spreads about long waiting times and cumbersome bureaucracy, more and more migrants are avoiding travelling so far north, said the board on Thursday.

“The processing times are pretty long compared to Germany, which has a fast-track lane…in Sweden It is difficult to get housing and jobs; this affects people's choice of destination country,” Anders Danielsson, head of the Swedish Migration Board, told the TT newswire on Thursday.

Germany, which receives the most refugees in Europe in real terms, is expected to have seen 400,000 migrants cross its borders at the end of the year. But other EU countries are also welcoming more asylum seekers. Hungary, Italy and France all accepted more than Sweden over the first three months of 2015.

However, Sweden still welcomes the most children in the EU. Around 12,000 children travelling alone are expected to arrive in Sweden in 2015, up from the previous predicted figure of 8,000.

Another reason behind the Migration Board's revised figures is that it has become increasingly harder to travel through Europe. France has set up controls its border with Italy, which Switzerland is also considering, and Hungary is erecting a fence on the border to Serbia.