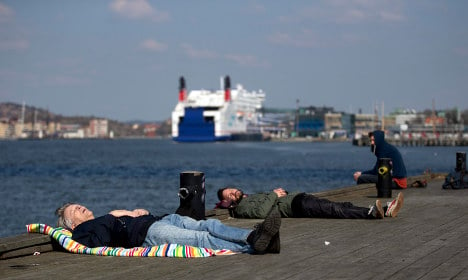 The new pool is in Gothenburg. Photo: Adam Ihse/TT

Gothenburgers – who have a reputation for a wry sense of humour – were given the chance to vote on the name for the new outdoor public swimming pool in the Frihamnen area of the city.

The shortlist included a range of other bizarre options such as “Dopp i grytan” (which means “dip in the pot” and refers to how Swedes like to dip bread in meat juices at Christmas”), “Plaskekörka” (which roughly translates as “splash church” – Gothenburgers pronounce the Swedish word for church, “kyrka” slightly differently) and “Blöta Älvsbadet” (meaning “wet river bath”).

But locals decided to choose “Pöl Harbour”, which translates to “puddle harbour” in English, but when correctly pronounced in Swedish sounds distinctly like Pearl Harbor, the US naval base that was attacked by Japan during the Second World War, leaving 2,402 people dead.

Within hours of the announcement, “Pöl Harbour” was trending on Twitter in Sweden, with users divided on whether they found the new name hilarious or deeply offensive.

One user, Alexander Edström wrote in English: “Pöl Harbour…love it!”, while Oskar Edström tweeted the US Embassy of Sweden asking if any officials were planning to take a dip.

But Chairman of the National Union of Teachers in Gothenburg Gunnar Valinder used his Twitter account to declare the new name “incredibly embarrassing”.

“What have we Gothenburgers done? Gothenburg's new pool called 'Pöl Harbour',” he wrote.

Cecilia Dalman Eek, Member of Parliament for Gothenburg for Prime Minister Stefan Löfven's Social Democrat party told The Local that she also felt the new name was “not totally appropriate”.
“The Gothenburg sense of humour is quite relaxed and often we seem to think the best way to handle really serious trouble is to use humour,” she said.
“But I am not sure if it has worked in this case. I get the wordplay…I am not quite sure if I think it is funny. It is a bit provokative.”

Regional reporter for Swedish broadcaster SVT Henry Kruusval, who announced the decision, said he was not surprised that Gothenburgers had opted for the wacky new name.
“It was quite expected,” he was quoted as saying on SVT's website, describing the title as “genius”.
24 percent of those who voted opted for “Pöl Harbour”, with “Inälvsbadet” in second place, another pun-packed title which literally translates as “intestine pool” but refers to the swimming spot's location next to a river.
The swimming pool is situated next to a new sauna, which was named “Svettekörka” (which translates to “sweat church”) by Gothenburgers earlier this year.
The Local has contacted Gothenburg City Council and the US Embassy in Stockholm for comment.
What do you think of the swimming pool's name? Post your thoughts in the comments section below.