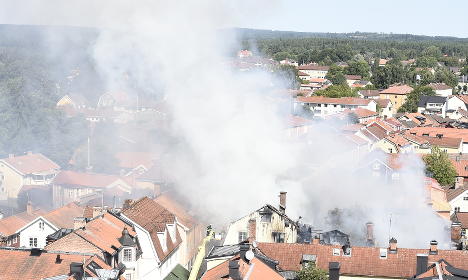 The whole old town of Eksjö is under threat from the fire. Photo: Mikael Fritzon/TT

80 firefighters are on site to fight the fire but Börje Andersson, a spokesman for the emergency services in Jönköping, told the Swedish newspaper, Aftonbladet: “There is a risk that the fire spreads even more. We do not have control of it yet.”

A 25-year-old woman was found in one of the burning houses – she died later in hospital.

The alarm came in just after 6am. The fire started in an attic inside an apartment and then spread to adjoining properties.

200 homes have been evacuated, and large parts of central Eksjö have been blocked.

According to Lasse Johansson, press officer for Jönköping police, the entire old town is in danger.

“They have emptied the entire county of firefighters. The entire wooden town could burn down because the fire is so bad.”

The old town of Eksjö is one of Sweden's oldest wooden towns. It was founded in 1568 and is described as a unique cultural treasure.