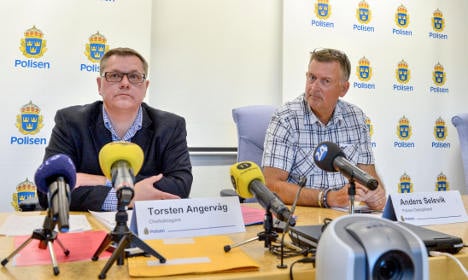 Prosecutor Torsten Angervåg and Anders Selevik of the police at a press conference on Tuesday. Photo: Bertil Ericson/TT

Swedish police told a press conference on Tuesday afternoon that doctors had examined the 24-year-old suspect, who is to be transferred to a psychiatric institution for offenders.

“There is no connection at all between the victims and the perpetrator. The motive appears to be nothing but a deed carried out by an offender with signs of mental illness,” said Anders Selevik, a spokesperson for Östergötland police.

The man admitted in a police hearing to stabbing a man and two women outside a library in Norrköping on Monday.

“An interrogation was held in which the arrested person admitted the acts. Another more thorough interrogation is being planned,” said Selevik.

Meanwhile, the Swedish psychiatric system was being criticized after the suspect's mother told Swedish tabloid Aftonbladet that he had failed to receive care for a history of mental illness before the attack.

Märta Wallinius, research coordinator at a psychiatric regional clinic for offenders in Växjö, hit out at what he described as a lack of communication and not enough focus on long-term follow-up care in Sweden.

“The method commonly used, which is based on voluntary participation and individual responsibility, rarely works with these kinds of patients,” she told the TT newswire.

The 24-year-old spent four weeks at a psychiatric ward three years ago, but turned down further treatment. His mother said she had been pleading with authorities to help him as he found himself shuffled between institutions.

“Psychiatric care says he must receive treatment for addiction. Hospitals that care for addicts say that he must first get help for his mental health problems. The social workers say that 'if he comes here voluntarily, we can help him',” she told Aftonbladet.

And the phenomenon is all too common, according to Wallinius.

“We need to tear down walls between the departments. If we do it together it is perhaps going to be more expensive at first, but in the end it will cost a lot less,” she said.

The scene of Monday's attack in Norrköping. Photo: Niklas Luks/TT

Two people remained in hospital on Tuesday afternoon with serious injuries after Monday's attack. The third victim, a 39-year-old woman from Romania, spoke to the Expressen newspaper after she was discharged.

“He didn't even look at me when he stabbed me,” she said.

The stabbings took place just after 11.30am with witnesses saying the man, who appeared to be drunk or on drugs, stabbed his first victim, a man, in the back outside the library before he ran off to stab two women moments later.

A member of the public then overpowered the attacker and held him until police arrived and arrested him.

“When I arrived on the scene, people were sitting down and crying. There was blood on the ground. Then I saw a woman who was bleeding quite heavily. The victims were about 50 metres apart,” a witness told Sweden’s Expressen newspaper.

The 24-year-old man is previously known to officers for petty crimes.

The attack in Norrköping took place exactly a week after a man and a woman were stabbed to death inside an Ikea store in Västerås, north west of the Swedish capital. Officers have not linked the two events.