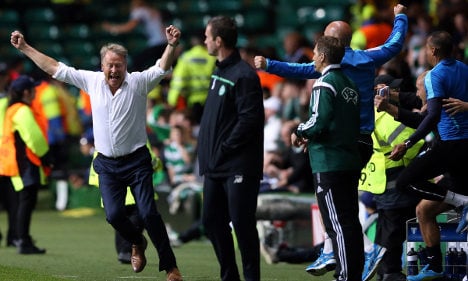 Celtic had made a strong start to the game as striker Leigh Griffiths slotted past Johan Wiland in the third minute before Nir Bitton headed home a Stefan Johansen corner in the 10th minute.

However, Swedish striker Jo Inge Berget — himself a former Celtic player — grabbed his first goal with a sizzling finish in the 52nd minute before Nikola Djurdic forced Craig Gordon into a fine save as the Swedes started the second half with confidence.

Griffiths grabbed his second of the match with a looping header in the 61st minute to restore Celtic's two-goal advantage but Berget's goal in the fifth minute of stoppage time handed the Swedes a lifeline as the Scots prepare to travel to Sweden next week with a slender advantage.

Malmö FF are hoping to claim their Champions League revenge after last year's defeat at the group stages. The team was the first Swedish club in the tournament for more than a decade, but failed to make it to the quarter-finals.

Their second leg against Celtic will be played in Malmö on August 25th.

Malmö manager Age Hareide told reporters after the match in Glasgow that he was confident of victory in Sweden.

When asked if he thought the tie had swung in his side's favour the Norwegian said:

“I think so. I said before if we got a goal at Celtic Park and there was only one in it then it would be an open game.”

“We like to attack to win. Maybe we should have attacked them even more here, but it is easy to be wise after the game.

“We will attack them at home and play our normal game and hopefully it will be enough.

“It was a terrible start for us. Conceding two goals in the first 10 minutes – I don't know what happened.

“We gave the ball away far too easily. It may have been the atmosphere. We had some young boys out there and it may have got to them.

“When they conceded the goals they looked a little bit shocked.

“But at 2-1 we had control of the match and Celtic looked tired…Then we made silly mistakes and you cannot do that at this level. But they worked their way back into the game and made it 3-2.

“We have a very good chance to beat them at home now and we only need one goal.

“Our fans have the habit of backing us fantastically at home. We will attack and we are up for it.”