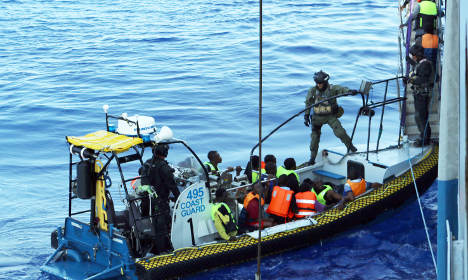 Luxembourg, which holds the EU's rotating presidency, announced the extraordinary meeting, to be held on September 14th, late on Sunday following a joint call for action by Germany, France and Britain.

“The situation of migration phenomena outside and inside the European Union has recently taken unprecedented proportions,” it said in a statement.

The number of migrants reaching the EU's borders reached nearly 340,000 during the first seven months of the year, up from 123,500 during the same period in 2014, according to the bloc's border agency Frontex.

At least 2,300 migrants have died at sea since January during attempts to reach Europe, almost invariably on overcrowded boats chartered by people smugglers. Just last week, 71 decomposing bodies were discovered in an abandoned truck in Austria — in a grim reminder of the ruthlessness of human traffickers.

“It is an issue which Sweden has been virtually alone in pushing, but it is becoming more and more obvious that it has to happen. I hope more countries realize that,” he told the TT news agency.

The meeting in Brussels is set to discuss international cooperation, measures to prevent trafficking and how to outline a return policy.

READ ALSO: Were human smugglers on board both of death?

Sweden recorded the next biggest number of asylum applications in the EU in 2014 after Germany — 13 percent, although as a proportion in relation to its population size, the country is shouldering the biggest burden in the bloc.

However there are signs that refugees are starting to shun the Nordic nation as news spreads about long waiting times and cumbersome bureaucracy in Sweden.

A report by Sweden's Migration Board (Migrationsverket) last month suggested that the number of predicted asylum seekers in 2015 would be around 74,000, compared to the 90,000 it suggested in February.

“The processing times are pretty long compared to Germany, which has a fast-track lane…in Sweden it is difficult to get housing and jobs; this affects people's choice of destination country,” Anders Danielsson, head of the Swedish Migration Board, told the TT newswire in July.