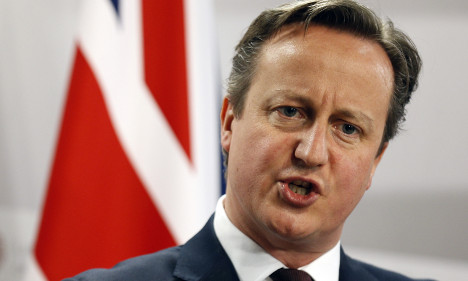 Britain's Prime Minister David Cameron at a conference earlier this year. Photo: TT/Mindaugas Kulbis
It shouldn’t take a picture of a dead child to humanize the flood of refugees fleeing the violence in the Middle East and Africa. People should have adequate reserves of empathy to understand that few of us would readily abandon our homes and settled lives for a future of uncertainty and fear, unless we were absolutely desperate.
It shouldn’t have taken the sight of three-year-old Aylan Kurdi, face down in the surf on a beach in Turkey, for those with power to speak about refugees as “victims” not “vermin”, to not refer to these people as a “swarm”. To talk about them as human beings.
But that, it seems, is what it has taken in the UK.
Of the four million Syrians who have fled their country since the war began, until last week the UK settled just 216. For a rich Western country, the UK’s response has been pitiful, bordering on criminal. It shows a level of meanness and lack of basic human decency that makes my birthplace seem like a foreign country to me. I’m utterly ashamed of the UK. I’m also utterly ashamed of some of my friends (who have swiftly become former friends) who have peppered their Facebook timelines with vile demonizations of refugees. These people have been excised from my life and they will not be allowed back.

Aylan Kurdi, 3, on a beach in Turkey. Photo: Nilufer Demir
My new home, however, has acted with an open heart and open arms. Sweden, as ever, has been at the vanguard of progressive values. Sweden has been vilified for being too generous, too welcoming to those who are running for their lives.
Those who criticized its early adoption of same sex marriages, gender equality and other progressive social issues have been lambasting Sweden’s generosity of spirit from inside and out since the refugee crisis began. The rise in popularity of the far-right Sweden Democrats is a symptom of this constant sniping.
However, the plans for the “refugees welcome” rally in Stockholm on Sunday and the record-breaking charity donations are almost certainly more accurate indicators of how the Swedes really feel.
Because yet again, as the turn in UK public opinion has forced the UK prime minister, David Cameron, to at least pretend he cares by promising to take in more displaced refugees, Sweden can be seen to have been ahead of the curve.
Sweden was right all along.
This is a crisis the scale of which has not been seen since the Second World War. Rich nations need to act, they need to take responsibility. Most refugees are displaced from their country of origin to a neighbouring country. Those who make it as far as Europe are in the vast minority. The least we can do is to offer them refuge.
READ ALSO: How to help refugees if you live in Sweden
And yes of course this influx of refugees can cause problems to the host country. There is no way that it will prove to be a smooth, untroubled process. We are in the midst of a huge global humanitarian crisis, after all, to which there is no easy solution. There will be fall-out, there will be things that happen, such as the murders in Ikea committed by an Eritrean asylum-seeker, that are beyond awful, that we wish would never have happened.
These incidents leave a scar on the soul of a nation. They turn a nation inwards. But the scars would be so much deeper if Sweden had done nothing, had refused to help those most in need, had turned its back like the UK has until now. Sweden can hold its head high – Sweden has proved once again that it is a beacon of humanity at a time when the world most needs that light.