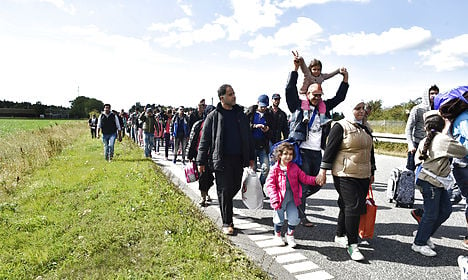 Refugees left Rødby on foot Monday morning. Photo: Bax Lindhardt/Scanpix
Some 60 to 100 refugees left Rødby on the southern Danish island of Lolland on Monday morning with the intention to walk to Sweden. Danish police are escorting the group, which includes men, women and children.
See also: Refugees flee from police in Danish port town
Danish network TV2 spoke with some of the refugees, who said that they did not want to have their fingerprints taken in Denmark and be subjected to processing by Danish authorities under the Dublin rules, which state that the first EU nation to register an asylum seeker must process the claimant’s application.
Some refugees told the broadcaster that they had heard about Denmark’s tougher immigration rules and longer processing times in relation to Sweden, while others said that they had family members waiting for them in Sweden.
“I want to go to Sweden. I like Denmark, but my family is in Sweden. There is no family in Denmark,” one woman who declined to be identified told TV2.
In the below video posted to Twitter, those marching appear to be chanting “Malmö, Malmö” as they leave Rødby.

Many of the refugees have been travelling for over a month.
According to TV2, of the estimated 175 refugees who arrived at Rødby Station on Sunday night, just one family – a man with two small children – remained in the town on Monday morning.
Kim Kliver, a spokesman for South Zealand and Lolland-Falster Police, told TV2 that police would not let the refugees out of their sight and suggested that they would be brought back to Rødby for processing rather than be allowed to walk to Sweden.
Travelling to Sweden on foot would take between 40 to 50 hours and would require either ferry connections or walking across bridges that are not open to pedestrian traffic.
Another group of refugees who arrived via train in Røderkro in southern Jutland on Monday morning reportedly refused to get off. According to TV2, the refugees did not want to risk being registered in Denmark and wanted instead to travel further on to either Germany or Sweden.
In a press release, South Jutland Police said that a small confrontation flared up when officers met the group.
“When the officers went to control the travellers, a situation occurred in which a single officer used pepper spray against a traveller when the strain on, among others, a woman with her children became dangerous. The man was subsequently okay,” the release read.
Meanwhile, authorities in the southern Swedish city of Malmö said that around 70 refugees had arrived there on Sunday night and added that they were ready to welcome any others.
Nils Norling, a spokesperson for Swedish police in the region said that “no action” was required by officers, stating that the escaped refugees “have the right to apply to Migrationsverket [Sweden’s Migration Board] for asylum”.
Fredrik Bengtsson, a spokesperson for Migrationsverket in Malmö told the TT news agency that extra staff had been called in and were working to find “around 300 accommodation places, should they be needed”.
“Shuttles between Germany and Denmark run all night and it’s not too far to Malmö,” he said.

Denmark has a tougher approach towards migrants compared to its northern Nordic neighbour. Just over 9,300 Syrians have moved to Denmark over the past year. Meanwhile Sweden has received asylum applications from more than 60,000 people.

Significant cuts in the welfare benefits afforded to asylum seekers were recently introduced in Denmark and the country has introduced one-year temporary residence permits for Syrian refugees and made it harder for them to bring their family members to Denmark.