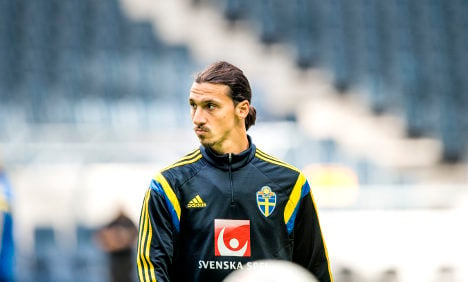 The 33-year-old Paris Saint-Germain striker came off at half-time in Saturday's 1-0 defeat to Russia in Moscow complaining of an apparent abdominal injury.

“We will see. Let's hope it goes quickly but it remains to be seen if he will be able to play,” Hamren said when asked about how long Ibrahimovic may be out.

“It depends how quickly he can recover,” added Hamren at a press conference at the Friends Arena in the Stockholm suburb of Solna, where Sweden host the Austrians on Tuesday.

“He has a haemorrhage to the internal oblique muscle of the abdomen. he did that in his last match for PSG. He felt it on Monday and Tuesday. Thursday and Friday he put everything in and felt nothing.

“But in an aerial duel in the 12th minute it opened up again and after that he struggled to be at 100 percent.”

Ibrahimovic said after the match on Saturday that he believed his team had deserved at least a draw in Moscow.

“I have no idea what happened to me late in the first half,” Ibrahimovic said. “I just felt a sharp pain in my leg and asked to be substituted. It seems strange but Sweden played even better without me,” he said.
“We dominated the play after the break and should have scored. I think we deserved a draw,” he added.
Sweden's defeat leaves them second in Group G with three games remaining, one point clear of the Russians and seven behind leaders Austria.