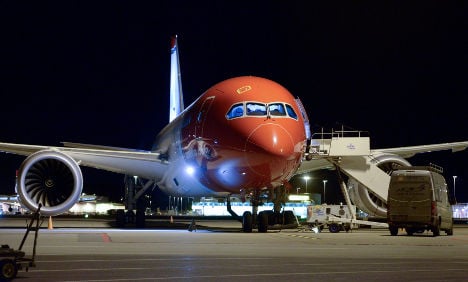 The antics took place on an evening Norwegian flight. File photo: TT
Travellers on Norwegian's evening flight from France to the Swedish capital were left giggling after a member of the company's cabin crew offered a special message to two passengers, who had apparently been caught doing a lot more than French kissing during the journey from Paris.
Speaking over a tannoy, he delivered his message in Swedish after the plane landed in Stockholm.
“He said something like 'we'd like to send our best wishes of happy reproduction to the couple that ventured into the bathroom earlier on',” a Swedish witness told The Local.
The woman, who wished to remain anonymous, added: “People around the plane started cheering and laughing and there was a lot of gossiping about who it could have been”.
Swedes aren't known for enjoying small talk, especially on public transport, and The Local's witness, who currently lives in Paris, said she had enjoyed seeing such interaction on home soil.
“It was quite surprising as this kind of thing is uncommon,” she said with a chuckle.
The air steward shared his jokey message of congratulations on the DY4314 flight to Stockholm on Monday night, which left Paris at 2115.
Passengers who did not speak Swedish were left baffled by the message, with the pilot merely saying “welcome to Sweden” in English over the tannoy.
However our witness added that not all Swedes were in on the joke either.
“I bumped into a friend afterwards and tried to chat about it with her, but it turned out she had been asleep the whole time!”
The nationality of the couple caught romping remains uncertain, as does exactly how the flight crew found out about their mile-high antics.
While earlier reports suggested that the person who made the announcement on the plane was the aircraft's pilot, a press spokesperson for Norwegian confirmed to The Local on Wednesday that it had in fact been a member of the cabin crew.
The company declined to comment further on the incident.
READ ALSO: How to fake being a local on Stockholm's subway