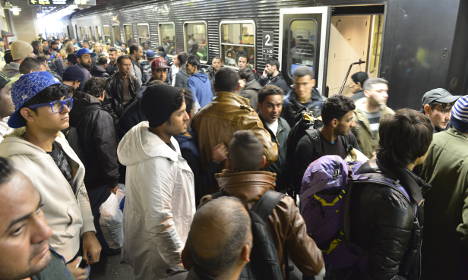 The ministers agreed by a large majority to the plan with just four EU members voting against it.

The UN and other international organizations warned it was the “last chance” for increasingly overwhelmed European states to agree on how to cope with the tide of people fleeing conflict in countries like Syria and Afghanistan.

Luxembourg Foreign Minister Jean Asselborn, who was chairing the meeting, said: “We have a text on the table which should deliver an agreement. It is very balanced. I think it will have a good influence on all the delegations so we can reach a result this evening.”

But central and eastern European states strongly resisted plans to force EU member countries to take a share of the new arrivals from front-line nations.

“I want to confirm that both the interior minister and myself… will unequivocally reject any effort to introduce a permanent mechanism of refugee redistribution,” Czech Prime Minister Sobotka told reporters in Prague.

“We also reject the introduction of quotas,” he added.

According to the deal agreed by the Commission, which must be ratified by EU leaders at a meeting tomorrow, a total of 4,469 refugees would be relocated to Sweden.

Sweden, which takes in the second-largest number of asylum seekers after Germany, has long supported introducing a mandatory relocation scheme.

“It would then mean that you force countries to do things they do not want. On the other hand, that's a situation we all sometimes experience, that you sometimes have to do things you don't want to do, just because the circumstances actually call for political leadership,” Swedish Migration and Justice Minister Morgan Johansson told Swedish Radio earlier this month while calling for the EU to exercise its political leadership.
Close to 480,000 migrants have arrived in Europe by sea this year according to the UN. The growing crisis has seen countries such as Germany, followed by Austria and Slovakia, announce they would introduce border checks after revealing they could no longer cope with the record influx.
But Sweden has insisted it will not follow suit in the near future.
“We are not close to such a situation,” said Prime Minister Stefan Löfven at a joint press conference with European Parliament President Martin Schultz last week.
Sweden is expected to recieve at least 74,000 asylum applications by the end of 2015.