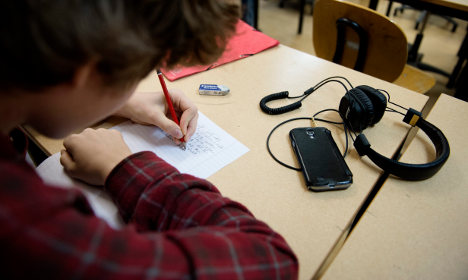 A new series of sex education books has been launched. Photo: Jessica Gow/TT

Puberty can be difficult enough for the average Swedish teenager. But how do you explain this challenging transition from childhood to adulthood to a child with special needs?

“Ten years ago I talked to a mother whose daughter was autistic and was wondering how to discuss menstruation with her when the time came,” Margareta Nymansson, one of the authors behind a new series of textbooks for special needs education dealing with sex, love and puberty, told The Local on Monday, explaining how the project began.

“I wrote a book explaining that all girls bleed and what happens when you do and when she got her first period she was not worried because she was prepared for it, in fact she felt proud,” she said.

A decade later, she and her colleagues Vija Bjelvenfeldt and Hillevi Tärmö have now, with the help of the education department at Uppsala Council, put together a book series designed to help pupils with special needs navigate thorny areas such as puberty, love and sex.

“It is a sensitive topic and therefore a topic where special needs education is very behind. We always felt it was something that had to be taught in class but we never had the right material. These books are supposed to form part of that future material,” said Nymansson.

She explains that children with special needs often struggle with nuances, so the idea is to explain these concept in a straightforward way.

For example, 'sex' in Swedish, which means both sexual intercourse and the number six, can be confusing. Instead the books use the slang word 'knulla' (best translated as 'to fuck'), which may be perceived as vulgar, but has the benefit of being unambiguous.

“We don't necessarily feel comfortable using it ourselves, but it is a word that many understand,” said Nymansson.

Yet another book, which is still in the making, discusses the right to refuse physical contact.

“It is about the right to say no, that nobody is allowed to do anything to you that you don't want them to do. It's not unusual that girls with disabilities get abused,” said Nymansson.

Sex education has been a compulsory subject in Swedish schools since 1955. But taboos are still being broken in the Nordic country, famous for its liberal stance on gender norms and sexual relations.