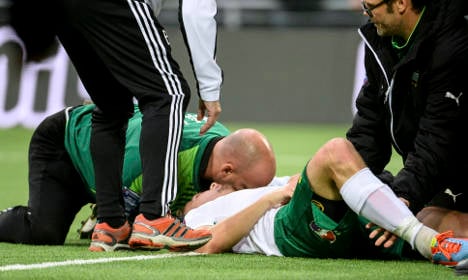 Erik Israelsson on the pitch on Sunday. Photo: Maja Suslin/TT
The player gave his side a 1-0 victory in the 88th minute of the Stockholm derby, but suffered severe concussion after he fell hard on the pitch, injuring his ankle and knocking himself out for several minutes.
He was so badly injured that an ambulance drove into the Tele2 Arena to rush him to hospital. But not before fans of rival northern Stockholm side AIK were heard calling out “let him die, let him die, let him die”.
Israelsson told his club's news site Hammarby Fotboll on Monday that he felt “refreshed and ready” for his recovery, despite continuing to experience a lot of pain in his back, shoulder and neck.
“I have a headache and feel quite bruised,” he explained.
“But everything has been X-rayed and there is no damage.”
The player added that had not believed the paramedics who told him that he had sustained his injury after scoring a goal.
“I thought they were pulling my leg,” said the 26-year-old who spent the night in hospital but was discharged on Monday.
The striker said that he had received plenty of text messages from people sending him “care and love” and added that he was very grateful for their support.
But his brother gave a passionate interview to Swedish tabloid Aftonbladet, laying into the AIK supporters who had suggested the player should have been left unattended to on the pitch.
“Why wish the young guy, who only does what he loves, death? A guy who is a brother, a son, a boyfriend,” said Johan Israelsson, who watched the match from Melbourne, Australia and said he was “close to fainting” as the drama unfolded.
“I want to believe that man is better than this. I want to believe in humanity….A society where we take care of each other. Where we love. Do not hate,” he said.
AIK released a statement on Monday apologising for the “unacceptable chants” following Israelsson's accident.
Meanwhile police in Stockholm said that two people had been arrested after four police officers were injured – three of them so seriously that they were taken to hospital – following a brawl that took place between fans.
A row developed after someone pressed the emergency button on a subway train, stalling services as hundreds of people crammed onto the platforms at Gullmarsplan station, close to the Tele2 Arena.
Hammarby will be without Erik Israelsson for their last game of the season in Sweden's top league (Allsvenskan) against southern Swedish side Halmstad on October 31st. They are currently ninth in the table, while AIK are third, after west Swedish side IFK Göteborg and Norrköping, based south of Stockholm.